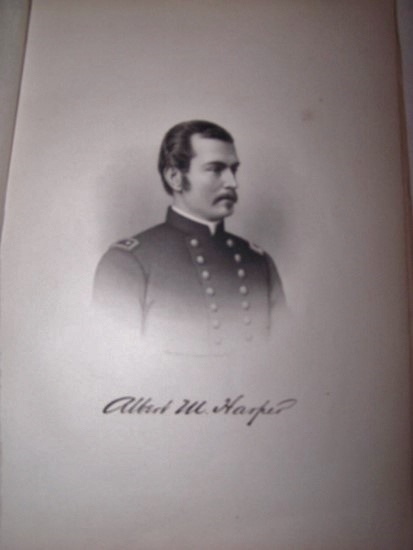 1 pages; A steel engraved portrait of Albert M. Harper extracted from Cushing's History of Allegheny County, Pennsylvania, Including its Early Settlement... also Portraits of Some of its Prominent Men. Chicago: A. Warner & Co., 1889. The portrait measures 10" by 7" with the image and facsimile autograph centered; protective tissue guard in place. Major Albert M. Harper (1843-1871) served with the Pennsylvania 139th Regiment of Volunteers from 1862 until the end of the War. He returned to his education at Rensselaer Polytechnic Institute, graduating with a degree in Civil Engineering in 1867. After managing an oil refinery, he entered into the mercantile sector, but his success was cut short by death from illness at the young age of 29.