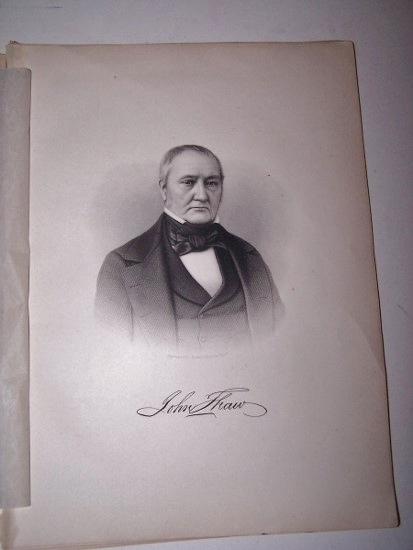 1 pages; A steel engraved portrait of John Thaw extracted from Cushing's History of Allegheny County, Pennsylvania, Including its Early Settlement... also Portraits of Some of its Prominent Men. Chicago: A. Warner & Co., 1889. The portrait measures 10" by 7" with the image and facsimile autograph centered; protective tissue guard in place. Engraved by Samuel Sartain of Philadelphia. John Thaw came to Pittsburgh from Philadelphia in order to establish a branch of the United States Bank of Philadelphia. He was associated with that institution for the remainder of his life. His son was William Thaw, Sr. the "genius" banker, transportation executive, and philanthropist. His grandson Benjamin Thaw was a member of the South Fork Fishing and Hunting Club. The club, founded by Henry Clay Frick and composed of wealthy Pittsburgh industrialists including Carnegie, Andrew Mellon and Philander Knox, owned the South Fork Dam which collapsed on May 31, 1889 causing the Johnstown Flood. Another grandson Harry Kendall Thaw (1871-1947) murdered the architect Stanford White, who was having an affair with Thaw's wife.