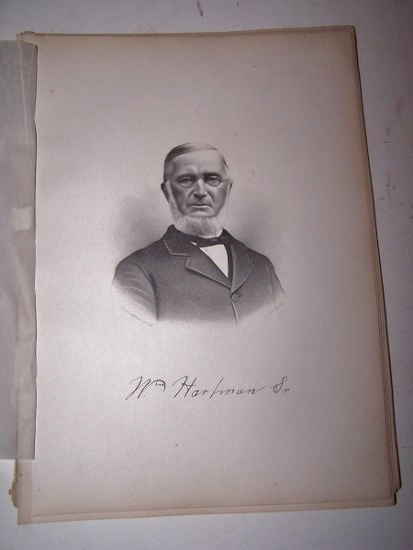 1 pages; A steel engraved portrait of William Hartman, Sr. extracted from Cushing's History of Allegheny County, Pennsylvania, Including its Early Settlement... also Portraits of Some of its Prominent Men. Chicago: A. Warner & Co., 1889. The portrait measures 10" by 7" with the image and facsimile autograph centered; protective tissue guard in place. William Hartman was born in Hesse-Darmstadt, Germany in 1822. He was apprenticed and worked as a journeyman in the shoemaker's trade until he was 24. In 1846 he married Catherine Steinman and then immigrated to America, eventually settling in McKeesport, Pennsylvania in 1858. He made his fortune in the retail shoe and boot business and erected a large business block in Mckeesport known as Hartman's Block.