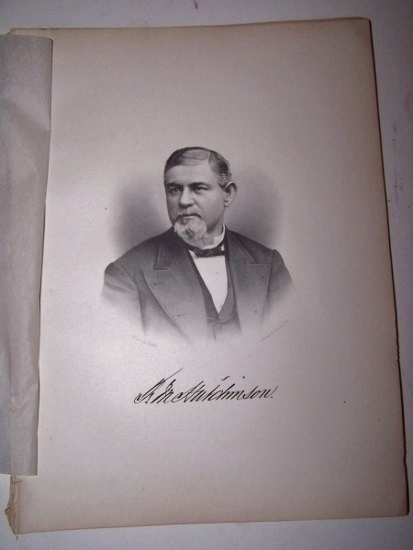 1 pages; A steel engraved portrait of F. M. Hutchinson extracted from Cushing's History of Allegheny County, Pennsylvania, Including its Early Settlement... also Portraits of Some of its Prominent Men. Chicago: A. Warner & Co., 1889. The portrait measures 10" by 7" with the image and facsimile autograph centered; protective tissue guard in place. Engraved by James R. Rice & Co.. F. M. Hutchinson was born in Philadelphia in 1827. At an early age he worked with General Dan Taylor on the enlargement of the Morris Canal; then under Major Moor on the NY & Erie Railroad. In 1850 he became assistant engineer of the Ohio & Pennsylvania Railroad. From 1858 to 1861 he served as assistant clerk of the state senate of Pennsylvania. In 1859 he was appointed engineer of the Lawrenceville Passenger Railway; then the Manchester Passenger Railway between Pittsburgh and Allegheny. He was also an engineer or officer with each of the following: Pittsburgh, Fort Wayne and Chicago Railway Co., the Marietta and Cincinnati Railroad and the Lawrence Railroad Company.