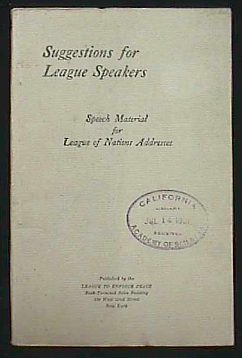 71 & [1] pages; Publisher's tan printed wrappers, textured with a surface to resemble cloth. Library stamp on front cover, minor marks at top and bottom (from previously having been tied into a bundle with string or twine) -- generally very good. A collection of "talking points" for the use of speakers aiming to sway public opinion towards the difficult goal of ratification of Wilson's proposed League of Nations by the U.S. Senate after the first Wprld War. The last section contains helpful quotes in favor of the League by various notables, including former President Theodore Roosevelt, who died just before this pamphlet was published. Socially, this is quite interesting, as the national debate over ratification for the League of Nations is probably the last great U.S. issue argued and decided without a major role being played by Radio. So, a whole phalanx of speakers might be expected to argue a cause like this before a large number of local groups. Within a few short years, such gatherings and their influence would be supplemented, and finally superceded, by radio, and later, television. In any event, issue-oriented background material for speakers like the present pamphlet was prepared for a small number of activists, and largely consumed in the struggle, and the surviving copies quickly abandoned once the cause was decided. This is now quite scarce, after nearly 90 years. See OCLC 4175752.; Experience the pleasure of reading and appreciating this actual printed item. It has its own physical history that imbues it with a character lacking in ephemeral electronic renderings.