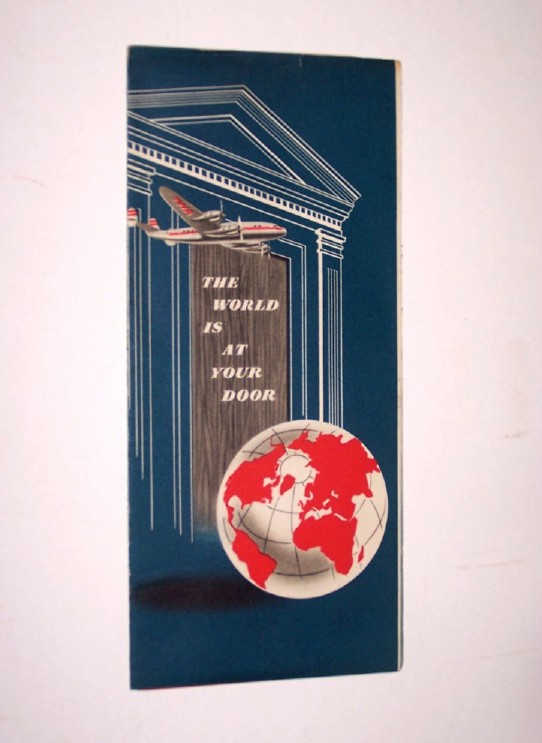 The World is at your Door

A quadri-fold broadsheet, richly illustrated and printed in tones of red, tan, blue and black. Dated on the TWA copyright slug in the margin: "March, 1946." This handsomely designed sheet was issued to promote TWA's stunning proposal to offer a round-the-world air service. The routes already approved by the Civil Aeronautics Board are in depicted in bold red lines; the proposed routes to complete the circumnavigation service were added in dotted lines. After breaking Pan American World Airways' legal designation as the United States' sole international carrier, TWA began trans-Atlantic service in 1946 using DC-4s and the elegant new Lockheed Constellation (shown on the cover of this brochure); soon the firm's name was changed to The Trans World Airline. (Previously, the old TWA stood for "Transcontinental & Western Air" - a product of the first of the firm's many mergers. The more familiar name: "Trans World Airlines" with the final "s" dates from 1950). TWA flights reached Cairo in 1946, Bombay would follow in January 1947, Ceylon in February 1953, and Manila in January 1958... It was not until 1969 that TWA opened the trans-Pacific link to complete its round the world network which was forcast in this splendid brochure from 23 years earlier. Sadly, the round-the-world service from TWA lasted only until 1975. Very good condition, with a tiny pencil note adding two figures suggesting a trip of over 13,000 miles. ; Experience the pleasure of reading and appreciating this actual printed item. It has its own physical history that imbues it with a character lacking in ephemeral electronic renderings.

Title: The World is at your Door

The World is at your Door