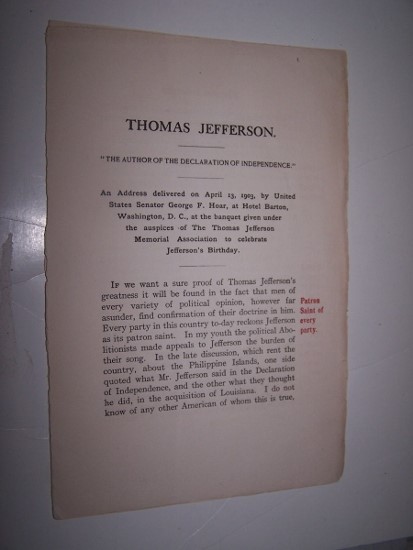 Thomas Jefferson : "The author of the Declaration of independence."

8 pages; An address delivered on April 13, 1903, by United States Senator George F. Hoar, at Hotel Barton, Washington, D.C., at the banquet given under the auspices of the Thomas Jefferson Memorial Association to celebrate Jefferson's Birthday. Nicely printed in black and red with a facsimile autograph of the author at the end. George Frisbie Hoar (1826 – 1904) was a prominent United States politician and United States Senator from Massachusetts. Hoar was also active in the American Historical Society and the American Antiquarian Society, serving terms as president of both organizations. He was a regent of the Smithsonian Institution in 1880, and a trustee of the Peabody Museum of Archaeology and Ethnology. This speech was delivered the same year as his Autobiography of Seventy Years was published. Hoar died the following year. An uncommon item - WorldCat locates only 5 copies.

Title: Thomas Jefferson : "The author of the Declaration of independence."

Thomas Jefferson : "The author of the Declaration of independence."