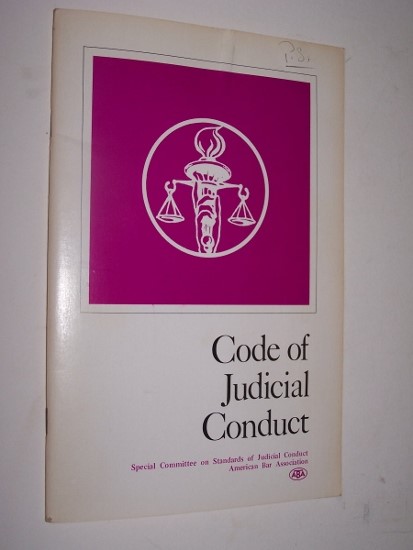 Autograph; 32 pages; Previous owner's initials at top of front wrapper "P.S." for Potter Stewart. Faint mark from paperclip at top of wrapper (now removed). This is a particularly fine provenance for this groundbreaking proposed second version of the American Bar Association's Code of Judicial Conduct, as Supreme Court Justice Potter Stewart was an active member of the ABA Special Committee charged with preparing a long-needed revision to the ABA's first Code, prepared by a previous committee, which met first in 1922 chaired by former President William Howard Taft (who was soon to be appointed as Chief Justice of the Supreme Court). While the Taft committee's Code, adopted in 1924, made a fine start, over the years it was perceived to be vague and imprecise in its strictures. (Perhaps Judicial misconduct had advanced in its sophistication over the middle part of the twentieth century...) In August of 1969, a new ABA committee was charged with coming up with a revised code. The new committee was chaired by California Chief Justice Roger J. Traynor. The fourteen members also included two former ABA presidents (Whitney North Seymour and Edward L. Wright), and several eminent Judges, but the "biggest name" was certainly Supreme Court Associate Justice Potter Stewart, whose copy of the final draft this is. This ABA Code of Judicial Conduct represented a three-year effort on the part of the committee. Justice Stewart took an active part in the work of drafting this Code, and the two folded sheets laid into his copy demonstrate that his involvement and interest did not terminate with the final adoption by the whole ABA of the final draft of his Special Committee, in August of 1972 (when this pamphlet was printed). The "Code" was just a fine and lofty statement of ideals, until and unless the individual States of the union adopted these standards and based their own rules and penalties on the ABA "Code." Justice Potter Stewart certainly followed the path to adoption of these standards by the fifty American States, and is likely to have done some behind the scenes persuasion where it might have been deemed necessary. These two printed sheets laid into his copy are xeroxes dated October 31, 1974; one charting the states which had adopted the "Code of Judicial Conduct" as of October 31, 1974 (this chart is broken down by parts of the process, including whether or not the particular State's Supreme Courts had the power to adopt the draft "Code's" standards, whether the particular States' Bar Associations assistance was wanted, and the expected dates when particular States were likely to adopt the "Code." The other sheet is a map of the United States showing graphically which states had already adopted the "Code", and which had yet to do so. To put this in perspective, part of the deficiency of the ABA's 1924 Code was that some States had never adopted it, and others had introduced a confusing array of amendments. A fine provenance: from the collection of Justice Potter Stewart who served as a Justice on the U.S. Supreme Court for nearly 24 years. In 1958, President Dwight D. Eisenhower nominated Potter Stewart to the Supreme Court to replace Justice Harold Hitz Burton, who was retiring. Stewart served on the Supreme Court until he announced his retirement from the Court on June 18, 1981 at the age of 66. During his tenure (1958-1981) as an Associate Justice of the United States Supreme Court, Potter Stewart made major contributions to criminal justice reform, civil rights, access to the courts, and Fourth Amendment jurisprudence. Stewart leaned toward moderate, pragmatic positions, but was often in the position of dissenting during his time on the Warren Court. Stewart's philosophy might be most coherently traced to Justice Robert Jackson, about whom Stewart said: "He saw that 'judicial activism' could be a deadening and stultifying force... that every coercive and centralizing court decision deals a blow ... to the ability and then to the will of the democratic process to operate with responsibility and vigor." ; Signed by Notable Personage, Related