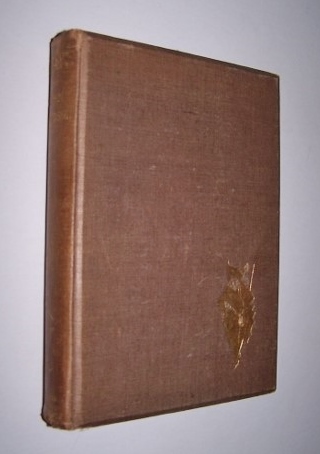 PLAYS BY JOHN DAVIDSON being An Unhistorical Pastoral, A Romantic Farce, Bruce A Chronicle Play, Smith A Tragic Farce, and Scaramouch in Naxos A Pantomime

(viii), 294, 15 (ads) pages; Clean and tight in original light brown cloth binding with gilt lettering at spine and gilt image of a Pierrot designed by Beardsley on front cover. cloth worn and chipped at spine ends. Of this edition 500 copies have been printed for England. Frontispiece, titlepage vignette and cover-design by Aubrey Beardsley. OCLC: 23103467 Attractive 19th century bookplate of David Belasco. David Belasco (1853 – 1931) was an American theatrical producer, impresario, director and playwright. He was the first writer to adapt the short story Madame Butterfly for the stage, and he launched the theatrical career of Mary Pickford. Belasco pioneered many innovative new forms of stage lighting and special effects. The bookplate was designed for Belasco by Mrs. Albertine R. Wheelan, the foremost California bookplate artist, and engraved by Mr. Spenceley. (Mrs. Wheelan also designed costumes for some of Belasco's productions.) "His bookplate is richly detailed and replete with symbolism relating to the theater, from the palette and lyre representing the creative arts to the masks of tragedy and various references to Greek theater. The winged allegorical figure holds aloft a light wand, no doubt denoting its owner's talent for dramatic lighting effects." [The Art of the Bookplate, 2003] This 1894 book contains one of the major contributions of Aubrey Beardsley to the art of his time. Considering his vivid achievement, it is necessary to remind ourselves that Beardsley's major artistic output took place over about six years. The frontispiece to this book of John Davidson's 'Plays' does not illustrate the contents, but, rather, is a significant caricature by Beardsley -- depicting some of his fellow travelers in the aesthetic movement. The image is staged as though it might be the program cover for one of the popular Christmas Pantomimes. At the center of his drawing, Beardsley has placed the cloaked figure of Sir Augustus Harris, the manager of the Covent Garden, Drury Lane and Her Majesty's theatres. Harris became known as the "father of Pantomime" and Beardsley's strong image is arranged as a Harlequinade - (the part of a pantomime in which the harlequin and clown play the principal parts, an inspired variant of the Commedia dell'arte.) A large-as-life Oscar Wilde appears, and beside him the nude woman is Beardsley's sister Mabel, an actress. The faun is Henry Harland, literary editor of the 'Yellow Book', the masked figure is the poet Richard Le Gallienne - strongly identified with the new literature of Decadence, and the ballerina is the dancer Adeline Genee. Henry Harland and Aubrey Beardsley made the decision to make the "Yellow Book' forever distinctively yellow (in color) and a cloth-bound book in format. Oscar Wilde may have caused the famous firing of Beardsley from the 'Yellow Book' -- [the press widely, but incorrectly, described Wilde as having carried a yellow book into the court where his pair of trials took place]. In some respects, the most unusual figure depicted is Beardsley's own sister Mabel. Beardsley, before his death-bed conversion to Roman Catholicism, was always willing to shock, and showing us Mabel Beardsley in the nude, must have given substance and spice to the rumors rolling through literary and theatrical London in 1894 -- that Aubrey Beardsley was having an affair with his year-older sister. (Some claim that he fathered her child, and that Mabel subsequently miscarried). John Lane donated Beardsley's original drawing for this frontispiece to the Tate in 1926 -- [see Tate N04172]. Satisfactory copies of this limited edition from 1894 are now scarce, but essential for every Beardsley collection. The great impressario David Belasco deserves our thanks for keeping this copy so carefully.

Title: PLAYS BY JOHN DAVIDSON being An Unhistorical Pastoral, A Romantic Farce, Bruce A Chronicle Play, Smith A Tragic Farce, and Scaramouch in Naxos A Pantomime

PLAYS BY JOHN DAVIDSON being An Unhistorical Pastoral, A Romantic Farce, Bruce A Chronicle Play, Smith A Tragic Farce, and Scaramouch in Naxos A Pantomime