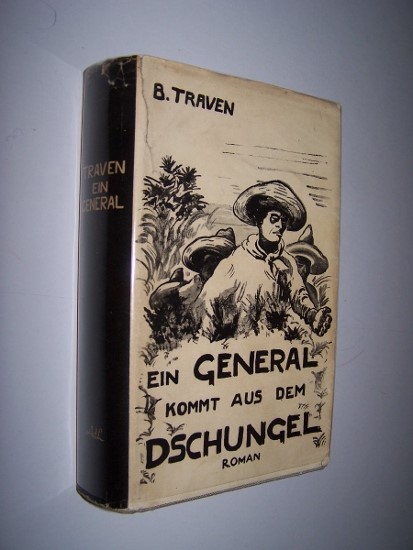 415 & [1] pages; Publisher's linen cloth, with title boldly lettered in dark brown on the spine and the front cover, top edges decoratively stained red. Despite a bit of a lean to the binding, a clean and attractive copy, showing very little wear, and with the scarce original pictorial dust jacket intact. The dj has a two inch closed tear along the upper gutter between the front panel and the spine, and a few small chips at the spine ends, but is integral and clean. Ink signature on the title page (and a few pages with pencil underlining -- see below for details). First edition in the original German of the last of B. Traven's series of "Jungle" novels, written in the 1930's after the publication of the writer's succesful 1920's adventure novels, including 'Der Schatz der Sierra Madre' [The Treasure of the Sierra Madre] and 'Das Totenschiff" [The Death Ship]. The author is still something of a mystery. Most literary historians acknowledge that "B. Traven" is a pseudonym. After this, there is little agreement. Was he German? American? Was he the radical anarchist Ret Marut, fleeing to Mexico to avoid a German death sentence? Or was he "Otto Feige" - Traven Torsvan, or Hal Croves? Was the author really Jack London, or Ambrose Bierce -- after faking death under their more famous names? Or was B. Traven really the illegitimate son of German Kaiser Willhelm II? We have no new information to shed light on the matter. The publication history of this novel is complicated, but less uncertain. Publication in Nazi Germany for the radical leftist writer (whoever he was...) was out of the question. And the publisher in Zurich who issued others in B. Traven's "Caoba" -- or Jungle series, appears to have found this one unappealing under the conditions of Europe on the brink of the second World War. The first version to appear anywhere was a translation from German into Swedish, published in Stockholm, in 1939. This Amsterdam edition is the first appearance in the original German. And it seems that the Nazi invasion of the Netherlands in May of 1940 destroyed the publisher's archives (as well as most copies of this edition, which had probably been published in an edition of about 3000 copies). This copy has the ink signature on the title page of Leslie I. Carey, dated 1950. Carey, [1895-1984] was Sound Supervisor for Universal Pictures, serving from 1947 to 1959 -- with credits on 338Hollywood films. Carey was nominated five times for the Academy Award, he won an Oscar in 1954 for The Glenn Miller Story. His early credits include "Letter from an Unknown Woman" in 1948. This was the second (and best) of the films made in Hollywood by the great director Max Ophüls. The director had been a German Jew, who fled, first to France, and then Hollywood (before returning to France). "Letter from an Unknown Woman" had a German source (a story by Stefan Zweig -- screenplay by Howard Fast), as well as a director originally from Germany. Coincidentally, 1948 was also the year that B. Traven's "The Treasure of the Sierra Madre" finally made its appearance in an unforgettable film by John Huston. So, it is not surprizing that a Hollywood insider would be looking for another B. Traven story. The minor surpise is that Leslie Carey found a copy of this 1940 Amsterdam edition to read. And it appears that Mr. Carey did read this copy. There is a short pencil list of page numbers on the rear paste down endpaper; and on the matching page numbers of this copy, a few passages are underlined in pencil (or ticked in the margins). All these minor pencil marks could be quite easily erased, but it seems more interesting to let this copy retain its history undisturbed. One does wonder whether Leslie Carey and Universal considered acquiring this property as the basis for a film. After all, the memory of three Academy awards for the Traven "Treasure of the Sierra Madre" was still quite fresh when Leslie Carey signed this copy of 'Ein General kommt aus dem Dschungel.' The English translation of this novel did not appear until 1954 ['General from the Jungle' London: Robert Hale Limited, 1954. There would not be an edition in the United States for another 18 years].