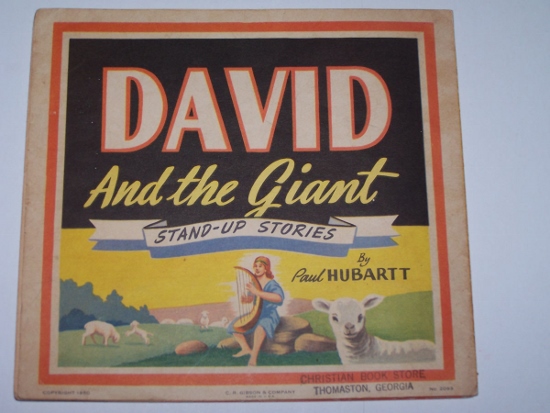 DAVID and the GIANT

Stand-Up Stories; 12 pages; This seven panel "stand-up book" retells the story of the Israeli shepherd boy who saved his country from Philistine invaders by killing the giant Goliath with a stone from his sling accompanied by colourful illustrations. OCLC: 51247786 Small bookseller's stamp at lower edge for Christian Book Store, Thomaston, Georgia. Regarding the publisher of this book, the founders of what became C. R. Gibson and Company immigrated from York, England to the U.S. in 1850. Printing was the Gibson family business, so they brought along a French handpress to start their business in America. The brothers -- Robert, Stephen, George and Samuel and John Gibson -- established two printing companies: one propelled by the outbreak of the Civil War in 1860 and the other which they purchased in 1870. The second company , John Gibson Company, evolved into C.R. Gibson and Company and continues to operate today.

Title: DAVID and the GIANT

DAVID and the GIANT