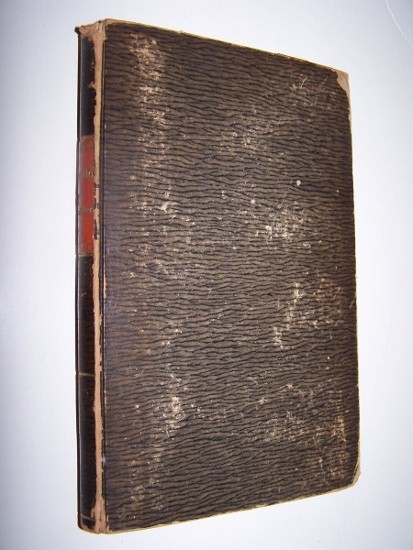 2 p.l., 203 & [1, errata] pages; Contemporary pattern-printed paper-covered boards, flat spine ruled in gilt, red titling slip lettered in gilt. Probably a publisher's binding. This is one of the early modern editions of "Orendel" -- a Middle High German poem, traditionally called a "Spielmannsdichtung." The first 103 pages contain the edition of the poem in the Middle High German original with numbered stanzas, and the final 100 pages consist of the introduction and notes by the editor Ludwig Ettmüller. This introduction cites the oldest manuscript of this poem, (Orendel is thought to date from the 12th century) known to the editor, which he states was written on paper in 1477 (small folio, on 64 leaves); in Ettmüller's time, this manuscript was in the Stadbibliothek in Strassburg. Today, alas, it is considered to be lost. Ettmüller also mentions a printed edition from Augsburg dated 1512 -- "Ein Hubsche Histori zu lesen vonvnsers Herre Rock wie der wunderbarlich einem kunig (Orendel genant) worden ist." (Evidently, there were two editions printed in 1512, one in verse, the other in prose). The story is associated with the town of Trier on the banks of the Moselle (called Treves in English), where the poem was probably written. Trier is the oldest city in Germany, founded in or before 16 BC. The poem's introduction narrates the story of the Holy Coat, which, after many adventures, is swallowed by a whale. It is recovered by Orendel, son of King Eigel of Treves, who had embarked with twenty-two ships in order to woo Bride, the mistress of the Holy Sepulchre, as his wife. There is a shipwreck, the whale is captured, and after hundreds of lines worth of troubles and adventures, Orendel wins Bride and gets the magic coat. An angel summons the pair to return to Trier, where eventually, Orendel places the coat in a stone sarcophagus. Another angel annouces that Orendel and Bride are soon to die; they renouce the world and prepare for the end. The editor of this 1858 volume, Ernst Moritz Ludwig Ettmüller (1802 – 1877), was a noted German philologist. In addition to his editing a large number of standard German and Low German texts, Ettmüller also made an alliterative translation of Beowulf (1840), an Anglo-Saxon chrestomathy entitled Engla and Seaxna scopas and boceras (1850), and a well-known Lexicon Anglo-Saxonicum (1851). He composed at least two original literary works ['Deutsche Stammkönige' (1844) and 'Das verhängnissvolle Zahnweh, oder Karl der Grosse und der Heilige Goar' (1852)] -- making use of the alliterative versification which he so admired in the old German poems. This 1858 'Orendel' is in excellent condition, apart from some moderate diffusing foxing to a few gatherings -- unmarked, tight and clean. There is a small late 19th century bookseller's label mounted to the bottom of the rear paste-down endpaper [G. E. Stechert & Co. / (Alfred Hafner) / New York]. Minor rubbing to the hinges and to the paper-covered boards.