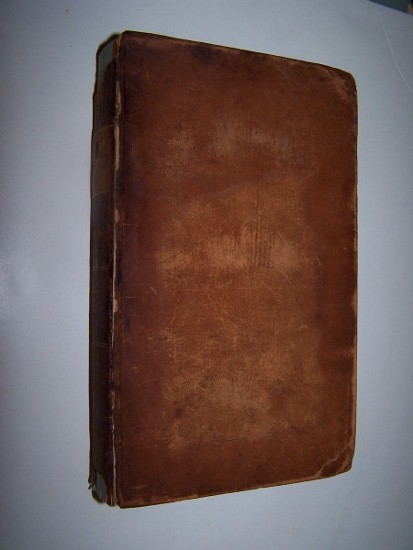 iv & 340 pages; Contemporary full sheepskin, flat spine ruled in gilt, titling slip lettered in gilt: "HORACE." A standard American school edition of Horace with the Latin text and extensive notes in English by Benjamin Apthorp Gould. It is interesting to note that Gould has protected his young readers by omitting the final two lines of Ode 1.4, and lines 5-8 of Ode 4.13 -- which refer in the original to sexual arousal. Further, Gould has omitted Odes 1.5, 1.23 and 1.25 and Epodes 8 & 12 entirely. [Even half a century later, the influential Loeb Library text omits Epodes 8 & 12, both in the Latin original and in translation. Hot stuff]. This is not a rare book. Gould's edition won a wide circulation among American institutes of higher learning. But the provenance of this copy is fascinating. It was the property of a 16 year old freshman at LaFayette College in Easton, Pennsylvania -- George C. Heckman. He signed the front free endpaper in ink and dated this first inscription: "Easton / Pa / Dec 13th / 1841." He then inscribed again just to the left: LaFayette College / May 4th / 1842. Young Mr. Heckman [born in 1825] had a sufficiently strong pride of ownership that he made a manuscript bookplate for himself, and mounted it to the usual place on the front paste-down endpaper. The text is written in pen with thick repeated strokes in imitation of printing (or engraving): "The / Property of / Geo. C. Heckman" -- these letters are surrounded by a frame of double rules in ink. Underneath the text, Heckman has written in pencil: "LaFayette College Easton Pa." The effect is charming. George Heckman was born in Easton, Pa., on January 26, 1825, and was of German descent on both sides of his family; his ancestors were among the first emigrants to locate in eastern Pennsylvania. After attending the schools of Easton he entered Lafayette Collegein 1841, graduating in 1845. Immediately thereafter he entered Princeton Theological Seminary, from which he graduated in 1848. His first assignment was at Port Byron, N.Y., in 1848, where he continued in the Presbyterian church for over eight years. He next, in January, 1857, accepted a call to a missionary field in Wisconsin, remaining at Portage and Janesville for a period of four and one half years. In 1861 he moved to Indianapolis, Ind.,as pastor of the Third Presbyterian Church, now known as the Tabernacle Church. During the Civil War, upon invitation of Colonel King, of the Ninth Regiment, United States Regulars, he acted as volunteer chaplain of that regiment. Later he became Sergeant of a company of Indiana Minute-Men,formed wholly of clergymen, which, however, was not mustered into active service. After the Civil War, Heckman was offered the presidency of Hanover College, and also a charge, in Easton,Pa., over the church which he attended in youth, but he felt constrained to decline both of these to accept a call to the State Street Church, of Albany, N.Y., in 1867. Finally, however, he was persuaded to act as President of Hanover College, in which position he continued for nine years. In 1879 he became pastor of the Avondale Presbyterian Church, in Cincinnati, Ohio, and continued there until 1887 when he was invited by the General Assembly of the church to serve for one year as Secretary of the Century Fund, in connection with the centennial anniversary held in 1888. Upon the expiration of these duties he accepted a call to the First Presbyterian Church, of Reading, Pa., in 1889, where he served faithfully as its pastor until his death [in 1902] -- the latter year or two in the capacity of pastor emeritus. Heckman was also a Trustee of his alma mater, Lafayette University, Easton, Pa., and for many years on the Board of Home Missions and the Board of Publication of the Presbyterian Church, and sat in its General Assembly twelve times. Dr. Heckman was a member of the Society of the Sons of the Revolution through his great-grandfather, Lieut. Col. Peter Kichlein, of Easton, Pa. He became a member of the Pennsylvania-German Society at its organization on April 15, 1891, and was actively and continuously identified with its work until his death, serving as its president during the year 1894. His family made further use of this Horace text, as two of his sons have signed their names in the front, with dates about thirty years after their father's. One son who used this copy, William C. Heckman, eventually became assistant superintendent of the railway postal service. Another, Charles C. Heckman, became an attorney-at-law of Indianapolis, Indiana. There are also some pencil lists of names, and a note or two concerning a "Franklin Society" on the endpapers, and several notes in the text, in pencil and ink. This much traveled copy shows considerable wear. The binding is rubbed and there are pieces missing at both ends of the spine. The front cover is very nearly detached, just barely hanging by a thread of the sewing. The first and second gatherings stand a bit proud of the text block, and there is foxing and toning throughout. An interesting provenance, with an unusual manuscript book-label made by a teenager. One wonders whether in later years, as a Civil War veteran, College President, and officer of the Board of Publication of the Presbyterian Church, George C. Heckman finally had a proper bookplate engraved or printed for his library.