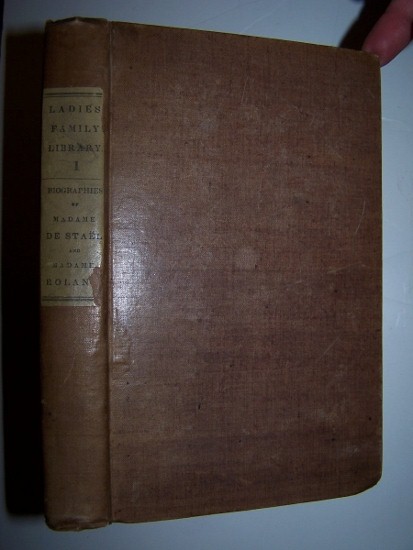 The Biographies of Madame de Stael and Madame Roland

Ladies' Family Library - 1 ; ix, 265 [1] pages; Publisher's smooth light brown cloth, flat spine with printed paper label. The spine has now toned to a pleasant shade of tan, there are a couple of narrow chips to the right side of the long label (with loss of one letter at bottom), and just minor points of light wear at the tip of the spine at the top. Diffuse foxing to the plain endpapers, title page, and scattered throughout -- as is typical of American paper of the time. Page edges untrimmed (the half title has a small tear at the fore-edge, otherwise not yet opened at the top edge to an adjacent front blank). There is a faint pencil signature "H. Little / 1845" on the front free endpaper, otherwise, no other marks of any sort. The engraved frontispiece portrait of Madame De Stael has retained its original tissue guard (sized only to cover the image) -- but it has lightly offset onto the guard and through it to form an even fainter shadow on the title page. A landmark of early American writing for, by, and about, women.During a long life, Lydia Maria Child (1802 – 1880) was an abolitionist, a women's rights activist, an opponent of American expansionism, an Indian rights activist, a novelist, a journalist and a Unitarian. She had notable achievements in each of these diverse fields. She started life as Lydia Maria Francis in Medford, Massachusetts. Her older brother, Convers Francis, became a Unitarian minister. Lydia started her education at a local dame school and later studied at a women's seminary. Upon the death of her mother, she went to live with her older sister in Maine where she studied to be a teacher. During this time, her brother, Convers, a Unitarian minister, who had been educated at Harvard College and Seminary, saw to his younger sister’s education in literary classics. She read an article in the 'North American Review' suggesting that New England history offered much material to a prospective novelist. Inspired by this article, Lydia immediately wrote the first chapter of a novel entitled 'Hobomok'. Encouraged by her brother's praise, she finished it in six weeks, and 'Hobomok: A Tale of Early Times' was published (anonymously) in 1824. From this time until her death she wrote, and published, continually. Lydia Francis taught school until 1828, when she married Boston lawyer David Lee Child. Lydia Child and her husband began to associate themselves with the anti-slavery cause in 1831 through the personal influence and writings of William Lloyd Garrison. Mrs. Child was a also a committed women's rights activist, but did not believe significant progress for women could be made until after the abolition of slavery. But while she did postpone her political activism concerning women's rights, Lydia Child wrote and published a series of books intended for the use and edification of women -- 'The American Frugal Housewife,' a book of kitchen, economy and directions (1829; and eventually a 33rd edition appeared in 1855); and 'The Mother's Book' (1831), an early American instructional book on child rearing, subsequently published in editions in England and Germany. In 1832, she wrote this volume, intended to be the first of 'The Ladies' Family Library,' a series of biographies (which eventually extended to 5 volumes, 1832–1835). The first words to the Preface to this first volume makes Lydia Child's intentions clear - and she even is specific about the design and style of the physical appearance of her proposed volumes: "The object of the Ladies' Family Library is to furnish a series of volumes, which will suit the taste, and interst the feelings of women.... The volumes will be handsomely printed, each containing a good engraving. As the series will be numbered upon the outside, and not upon the title-page, purchasers can make such selections as they choose, and have them bound in whatever order they think proper." Indeed, there is an unsually large printed paper label mounted to the spine, which, along with the half title, is the only reference to a volume number for this first appearance of 'The Ladies' Family Library,' and Mrs. Child's suggestion that buyers might bind to their own taste and requirements was evidently taken up by most, as this early American trade cloth binding is now quite scarce, particularly in such fresh condition.

Title: The Biographies of Madame de Stael and Madame Roland

The Biographies of Madame de Stael and Madame Roland