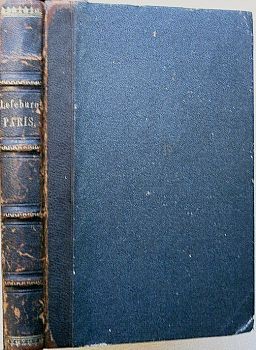 viii, 416 pages; Contemporary half morocco over pebbled paper covered boards, brown endpapers. Binding quite rubbed along the spine, with wear along the joints but covers still attached; there is an internal tear to the title page, 3 inches, affecting the imprint, which has been repaired from the blank verso with an old piece of paper. Edouard de Laboulaye caused a sensation with the publication of his Paris en Amérique, which went through a large number of impressions during the 1860's. Translations appeared in English and several European languages, including Russian. The German edition was first published in Berlin in 1867, the volume offered here is the first of two editions published by Besold in Erlangen in 1868. The later edition had a preface by the author, and stated that Hermann Pemsel's translation was made from the 19th French edition. In this earlier Erlangen edition, the half title states the real name of the author. Laboulaye was a long-time student of American democracy and became committed to the Unionist cause in the Civil War. He also chaired a world conference on Slavery in Paris in 1867 and played a role in the ending of the French Monarcy. Scarce. OCLC: 24295186 Sabin 38441.; Experience the pleasure of reading and appreciating this actual printed item. It has its own physical history that imbues it with a character lacking in ephemeral electronic renderings.