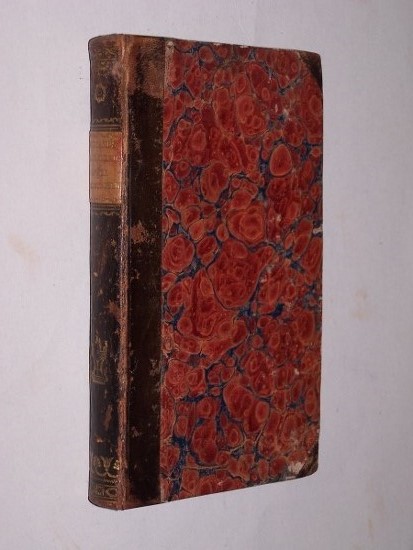 238 pages; Contemporary binding: brown half calf over marbled boards, flat spine with gilt stamped decoration and a gilt-lettered label in citron, text block edges decoratively stained blue-green. Two folding engraved maps at the end. A lovely copy of this geographical dictionary of the Holy Land in Swedish. The author, Samuel dmann [1750-1829], was a Swedish theologian , naturalist , goegrapher, cultural historian and hymn writer. He was a student a Upsala University, where he was part of the circle of the great natural scientist Linnaeus. After taking a degree in 1772, he settled as pastor at Vrmdvgen in 1773 where he developed into a talented naturalist, hunter and fisherman. Based on his studies and experiences in the field, he wrote a number of articles between 1780-1793 in the Royal Academy of Sciences Journal concerning the Smew , Caspian tern , black level , osprey , long-tailed duck , grundmrglan , seals and shrews. dmann earned the honor of becomming member number 229 in the Royal Swedish Academy of Sciences. His active life changed after a bout with chills and fever in the early 1790's. This led him in 1792 to move from Vrmdvgen to Uppsala, where he came to spend most of his time writing, eating and sleeping in a single room where he could control the ventilation. Just before the end of the eighteenth century, he became professor of Theology at Uppsala, and was noted as an author and translator of hymns. But, perhaps seeking to expand his mental horizons beyond the confines of his single room, Samuel dmann also became a translator of works concerning travel and geography, producing Swedish translations of James Cook , Pierre Sonnerat, Carsten Niebuhr. and others. This handsome geographical lexicon of the Holy Land nicely combined the author's interests and expertise. This 1812 edition is the second; the first version was published in 1799 [Uppsala: Edman, 208 pp.] A lovely copy, with the two folding engraved maps at the rear in perfect condition. A lovely copy; the binding shows just minor rubbing with a bit of cracking along the lower portion of the hinge to the front cover -- it remains sound and handsome. The text block is tight, clean and unmarked. Now scarce, see OCLC: 38192063 [2 locations -- Yale, and Emory University].