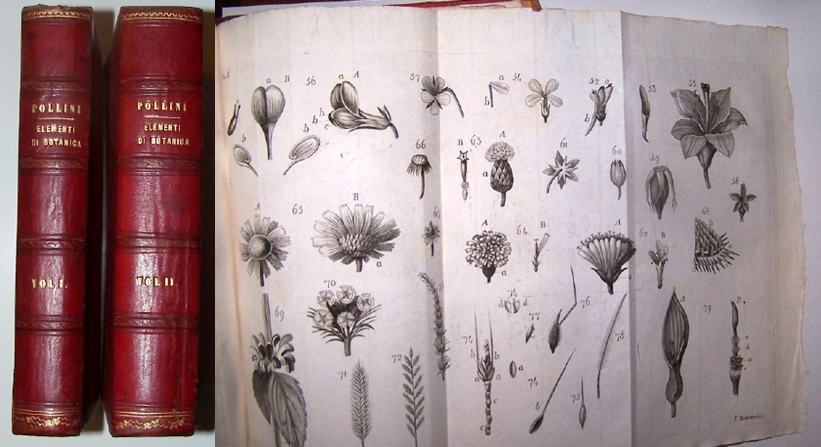 392, 11; 526, 9 pages; Contents clean and secure in binding of red calf spines over red pebbled boards; boards rubbed at corners, else very good condition. 392 p., 11 c. di tav. ; 526 p., 9 c. di tav. Two lovely volumes illustrated with 20 very nice folding engraved plates. 1810/1811. OCLC: 797828006 Ciro Pollini (1782 - 1833 ) was an Italian physician and naturalist. Pollini obtained a medical degree from the University of Pavia in 1802, but chose to concentrate on the study of botany. In 1805 he became assistant director to Fulgenzio Vitman, an Italian clergyman and botanist who developed the Brera Botanical Garden (Orto Botanico di Brera) in Milan out of a former Jesuit garden, under the direction of Maria Theresa of Austria. In 1806 when Vitman died, Pollini became acting director, a position he hoped to retain, but in March 1807 the directorship was given to Paolo Sangiorgio. Pollini became professor of botany and agriculture at the Liceo of Verona, where he co-founded the Literary Society of Verona. ; Experience the pleasure of reading and appreciating this actual printed item. It has its own physical history that imbues it with a character lacking in ephemeral electronic renderings.