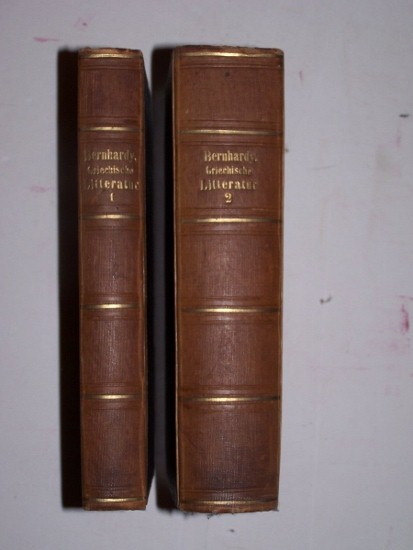 530; xxiv, 1072 pages; 1836/1845 Two volumes, bound in contemporary (publisher's?) black pebbled boards backed with brown ribbed cloth -- titles lettered in gilt on the spines along with thick gilt rules dividing the spines into panels. Edges of the leaves sprinkled red. Moderate shelfwear, scattered foxing (mostly to the first and last leaves of each volume), but an attractive and sound set of the scarce first edition of this standard work. The two volumes are described as: "1.Th. Innere Geschichte der Litteratur.--2.Th. Geschichte der griechischen Poesie." The second volume was published in 1845, nine years after the first appeared in 1836. The bulk of the second volume (with xxiv & 1072 pages) is about twice that of the first volume -- although the present set is bound in two volumes, it is sometimes found divided into three. Bernhardy, who was one of the final survivors of the school of Friedrich August Wolf, lived until 1875, and new editions of this important work were published throughout the nineteenth century. This first edition of the Grundriss der griechischen Litteratur is a landmark in the transformation in classical scholarship effected by the German scholars of the nineteenth century. J. E. Sandys stated that [it] "deserved to be remembered with respect, ... as the first to set a distinctly higher standard of what is meant by the History of Literature." Scarce -- see OCLC: 13088239 (9 locations). ; Experience the pleasure of reading and appreciating this actual printed item. It has its own physical history that imbues it with a character lacking in ephemeral electronic renderings.