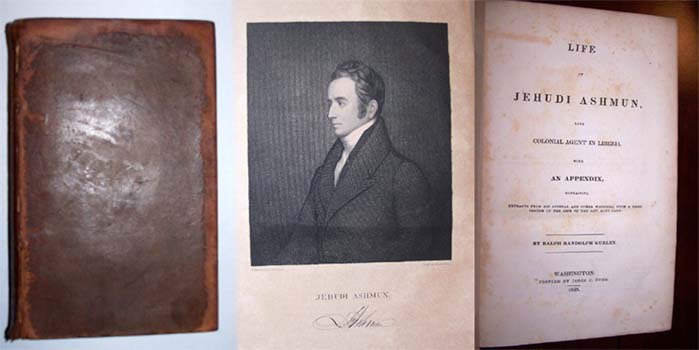 396; 160 pages; With an Appendix, containing extracts from his Journal and other Writings; with a brief Sketch of the Life of the Rev. Lott Cary. Contemporary full calf, edges of the boards showing considerable, deep rubbing, flat spine has the surface nearly rubbed away, hinges cracking, but still holding. A solid copy, but no longer handsome. Frontispiece portrait of Jehudi Ashmun w/ tissue guard. Scattered foxing throughout, with several gatherings somewhat toned brown. Jehudi Ashmun [1794-1828] reorganized the Liberian mission shortly after arriving in 1822 as principal Agent of the American Colonial Society. While his tenure was marked by various difficulties and controversies, most sources agree that he found Liberia on the verge of collapse, and left it a strong and vibrant colony of over 1200, suppressing two rebellious attacks with a small force of 35 men and boys, facing overwhelming numbers among the rebels. The appendices are particularly of interest, including the whole text of Ashmun's :The Liberia Farmer" -- a practical pamphlet advising the industrious settlers on the climate of Africa, the soils of their region, fencing, manures and other preparations, and the sorts of crops which might be cultivated to best advantage: rice, indian corn and cassada, yams, sweet potatoes, plantains, bananas and oranges, limes and other fruits, pineapples, cotton, sugarcane, coffee, indigo, ginger, etc. At the very end of the volume is a section, with a separate half title, devoted to the life of Lott Cary, an African American born into slavery near Richmond, Virginia. Cary managed to teach himself to read and write, and became an invaluable warehouseman in tobacco cultivation, to the point that he saved enough from selling odd bits and pieces left over from the parcels consigned to his warehouse that he was able to buy his freedom and that of his two children - for $850, a substantial sum in 1813. Lott Cary was the first Baptist missionary to Liberia and ran the affairs of the Liberian colony after Ashmun's first departure, and it was recommended that his leadership be made official and permanent when Cary died suddenly as the result of his hands-on approach to the defense of a property of the Colony at Digby, near Monrovia. This storehouse had been robbed by natives, who had allowed slave traders to make use of the facility. Lott Cary organized a defensive force; he and several others were killed when a candle was overturned while Cary and his men were loading gunpower into cartridges. [See The Journal of Negro History 7, no. 4 (October 1922), 380-418]. ; Experience the pleasure of reading and appreciating this actual printed item. It has its own physical history that imbues it with a character lacking in ephemeral electronic renderings.