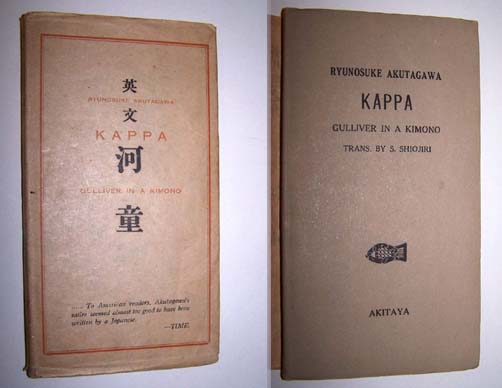 154 pages; Publisher's flexible grey boards printed in black, pictorial endpapers, in a fragile dust jacket printed in black and red on thin paper stock. This is the third printing of the first English language edition of "Kappa" -- the masterpiece of Ryunosuke Akutagawa, considered by some the father of the Japanese short story. His mother went insane shortly after his birth in 1912, so he was adopted and raised by his maternal uncle, Akutagawa Do-sho-, from whom he received the Akutagawa family name. Akutagawa published his first short story "Rashomon" in the literary magazine Teikoku Bungaku ("Imperial Literature"), while still a student. The story, based on a twelfth-century tale, is well known in the west thanks to the classic film Rashomon (1950) directed by Akira Kurosawa. The film under this title is a reasonably faithful retelling of Akutagawa's later story "In a Grove." Only the title and the frame scenes set in the Rashomon Gate are taken from Akutagawa's story, "Rashomon." Kappa (1927), one of the author's final works, is a satire based on a creature from Japanese folklore. Towards the end of his life, Akutagawa began to suffer from visual hallucinations and nervousness. He was consumed with fear that he had inherited his mother's insanity. In 1927 he tried to take his own life, together with a friend of his wife, but the attempt failed. He finally committed suicide by taking an overdose of Veronal, which had been given to him by Saito Mokichi on July 24, 1927. His final words in his will claimed he felt a "vague insecurity" (Bon'yaritoshita fuan) about the future. He was 35, and left about 150 stories. The endpapers of this fragile English translation by Seiichi Shiojiri reproduce the ink drawing of the Kappa made by the author, Ryunosuke Akutagawa. Kappa is a satire, presented as the first-person account of a madman, Patient No. 23, as transcribed by the author (who provides a brief explanatory note). The story the man tells is of winding up in 'Kappaland', a whole different world into which he fell as he chased a Kappa while on a mountain-climbing excursion. The dust jacket to this scarce edition, has Japanese characters in black and English letters in pale red. Helpfully, it supplies a descriptive subtitle: "Gulliver in a Kimono." Along these same lines, there is a quote attributed to "Time" -- ".... To American readers, Akutagawa's satire seemed almost too good to have been written by a Japanese." This Osaka edition first appeared in June, 1947; there was a second impression in November, 1947, and this third impression was published in August, 1948. This printing mentions a US distributer on the title page ["P.D. & Ione Perkins, South Pasadena, California"] Kappa achieved a wider English language distribution in 1949 with an edition from a larger Tokyo publisher, The Hokuseido Press. This is a well-preserved copy of the earlier and delicate Osaka edition, unmarked, clean and tight, in a slightly used and toned dust jacket with minor edge wear and a few tiny chips at the spine ends. Frontispiece portrait of the author, from a photograph. ; Experience the pleasure of reading and appreciating this actual printed item. It has its own physical history that imbues it with a character lacking in ephemeral electronic renderings.

Title: KAPPA (Gulliver in a Kimono) Translation and introductory notes by Seiichi Shiojiri