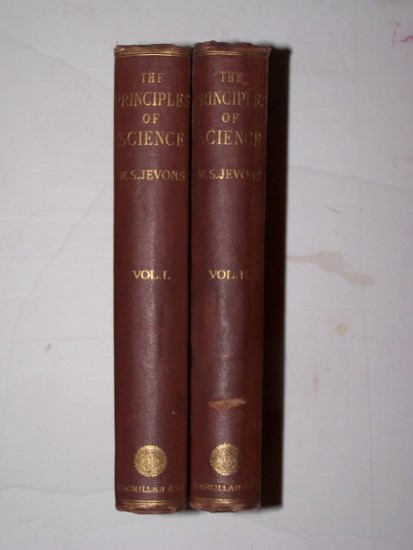 First Edition of this classic work on Logic and Scientific Method. Two octavo volumes in original brick cloth bindings with gilt lettering at spines. xvi, 463, (1); vii, (1), 480 pp. Engraved frontispiece illustration of The Logical Machine in Volume 1. Clean and tight with some light foxing to verso of endpapers, cloth rubbed at lower corners and spine ends, short tear to cloth at lower spine of Volume 2. Pages of Volume 2 unopened. Quite scarce in this First Edition, especially in the original cloth bindings. William Stanley Jevons was a noted logician, economist and statistician. Jevons' earlier books General Mathematical Theory of Political Economy (1862) and The Theory of Political Economy (1871) have been described as the beginning of applying mathematical method in economics. Jevons pursued his work in logic simultaneously with his work in political economy. In 1864 he published a small book Pure Logic; or, the Logic of Quality apart from Quantity, incorporating a critique of Boole's system of logic. In 1870 his Elementary Lessons on Logic appeared and became a widely used elementary textbook on logic. In 1874 Jevons published his most important work on logic and scientific method -- the work offerred here Principles of Science: A Treatise on Logic and Scientific Method. In addition to honing the material from his previous work on pure logic and the substitution of similars; in Principles of Science Jevons posits the idea that induction is an inverse application of deduction. His examination of the general theory of probability and the relationship between probability and induction is clear and illuminating. The entire work is enhanced by concrete scientific illustrations drawn from his broad knowledge of the various natural sciences. Jevons treatise was a very important contribution to the development of logic in the nineteenth century.

Title: THE PRINCIPLES OF SCIENCE - A Treatise on Logic and Scientific Method Two Volume Set