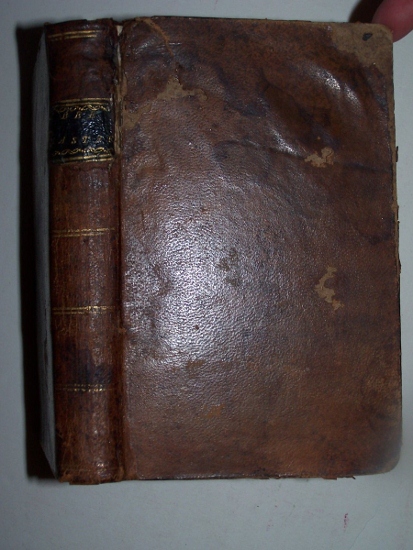 The Antient Bee-Masters Farewell Or, Full and Plain Directions for the Management of Bees to the Greatest Advantage

xii, 1-96, 61-252 pages; Full contemporary sheepskin leather binding with black leather title label at spine with gilt lettering. Binding has wear with boards revealed at edges and some eroded spots on front and rear boards, front hinge starting. OCLC: 34985255 Former owner's name on titlepage and a brief manuscript note on pp. 60-61 critiquing the "story method" and suggesting an alternative. Although the title page states "Illustrated with plates" - no plates are in evidence in this Irish edition. The provenance of this copy is particularly interesting, with the clear ink signature of James W. Brattle at the head of the title page. James Wells Brattle left his native Massachusetts for the midwest, where he was the first surveyor of the small town in Illinois' Hancock County which Joseph Smith Jr. subsequently named "Nauvoo." Brattle was a substantial citizen of Carthage, Illinois and a participant in the contentious last years of the founder of the Church of Latter Day Saints in the 1840's. James Wells Brattle was born June 10, 1795, in Pittsfield, Massachusetts, the son of Hannah Wells and William Brattle Jr., who fought at the Battle of Bennington. Not long after the death of his fiance, James Brattle moved West in 1829, settling in Hancock County, near Nauvoo. He established himself as the first experienced land surveyor in the county. He laid out that town, then called "Venus" which later became the center of the controversial Mormon community led by Joseph Smith. Brattle moved to Carthage in 1831 and was elected county surveyor. He soon had surveyed Warsaw, Augusta, Pontoosuc, and other towns. In 1834 Brattle moved to Macomb, but continued to work in Hancock County. During the Mormon War of 1846, he was seized and held for several days by the Mormons in Hancock County. Later Brattle was listed among those comprising the Hancock mob that resulted in the deaths of Mormon leaders Joseph and Hyrum Smith. Later in 1846, Brattle was named as one of four prominent Anti-Mormons who were being targeted for assassination by Mormon leaders in the western part of Iowa. In the 1850s Brattle participated in the surveys for the developing railroads and served as McDonough County surveyor many times during the 1860s and 1870s. The extended title of the book offerred for sale here continues: Disclosing further improvements of the hives, boxes, and other instruments, to facilitate the operations; especially that of separating double and treble hives or boxes, with certainty and safety, without injuring the bees; interspersed with new but important observations: the whole studiously adapted to general use; with an appropriate method for the curious. Also brief remarks on schirach, and other distinguished apiators on the continent. Deduced from a series of experiments during thirty years. John Keys was a Welsh Bee-keeper and wrote this work from Bee-Hall near Pembroke. Keys called for the establishment of a society to popularize humane beekeeping. Other agricultural societies had given some attention to beekeeping, but no explicitly apicultural society existed in Britain until 1799.

Title: The Antient Bee-Masters Farewell Or, Full and Plain Directions for the Management of Bees to the Greatest Advantage

The Antient Bee-Masters Farewell Or, Full and Plain Directions for the Management of Bees to the Greatest Advantage