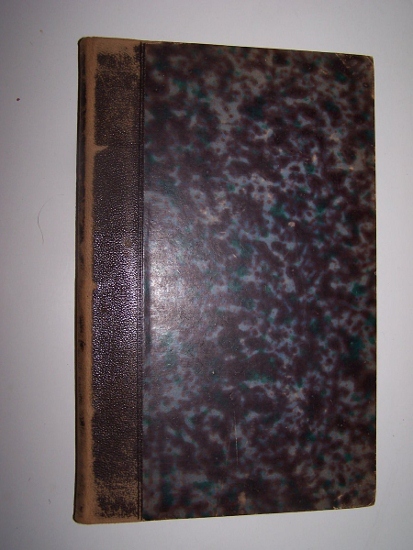 3 p.l. & 140 pages; Contemporary quarter morocco over blue pattern-printed marbled paper-covered boards, flat spine lettered in gilt, pale yellow endpapers. Julian Klaczko was a Polish-born writer and politician, fluent in Hebrew, Polish, French, and German. His parents were wealthy Jews, and his birth-name was Jehuda Lejb; at the age of 17 he published a book of Hebrew poetry called "Duda'im." He studied in Wilno and Knigsberg and moved to Heidelberg after earning a PhD. After the failure of the Poznan' uprising (1848) he emigrated to France where he lived for the following 20 years. In Paris, he changed his name and converted to Christianity (1856) after the death of his father. Paris was a leading center of the Poles in exile from their subjugated homeland. Klaczko was a co-editor of Wiadomos'ci Polskie, but his fluency in French led to his frequent and influential pieces published in Revue de Paris, Revue Contemporaine, and Revue des Deux Mondes. The present work shows how Austria was drawn into war with Prussia. This book publication followed a version published in one of the leading journals the previous year. ["Les pages qui suivent ont paru dabord dans la Revue de Deux-Mondes du 15 septembre et du 1er octobre 1868."] Klaczko's writings so impressed leading Austrian politicians of his political talents that he moved to Vienna in 1869, the year this book was published. And in Austrian, Klaczko was appointed by Count Benst to the Ministry of Foreign Affairs, holding in addition a seat in the Galician Diet at Lember. Klaczko argued with great force in favor of Austria's entering the Prussian war in favor of the French, but this was out of harmony with Austria's policy of neutrality during the war of 1870. He soon resigned his public offices and returned to Paris penniless. "Sadowa" in the title refers to the Battle of Sadowa, [Sadov, or Hradec Krlov] -- the decisive battle of the Austro-Prussian War, in which the Kingdom of Prussia defeated the Austrian Empire. An armistice signed at Prague followed three weeks later. Sadowa and its following armistice cleared a path toward German Unification. It also aroused the French public's resentment of the Prussian victory. Cries of "Revanche pour Sadova" ultimately led to the Franco-Prussian war, which Julian Klaczko foresaw, but was unsuccesful in his attempt to play a decisive role via Austrian involvement. An excellent copy of a work of great significance to European diplomacy and history of the time. A clean, handsome and unmarked copy, with some moderate rubbing to the spine, but no damage. ; Experience the pleasure of reading and appreciating this actual printed item. It has its own physical history that imbues it with a character lacking in ephemeral electronic renderings.