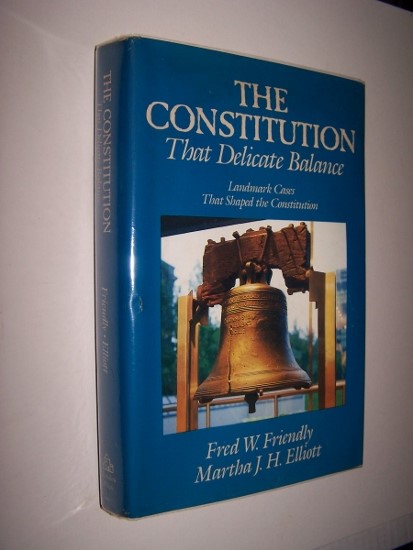 THE CONSTITUTION That Delicate Balance Landmark Cases that Shaped the Constitution

Autograph; 339 pages; Inscribed by Friendly and Signed by both authors on the titlepage to Justice Potter Stewart (to whom the book is dedicated) and Mrs. Potter Stewart. The printed dedication reads: "To Potter Stewart, who has taught us / '...what the British Crown had feared -- / and what the American Founders decided to risk.'" Clean and tight in original binding in very good dustjacket, slight lean to binding. From the collection of Justice Potter Stewart who served as a Justice on the U.S. Supreme Court for nearly 24 years. In 1958, President Dwight D. Eisenhower nominated Potter Stewart to the Supreme Court to replace Justice Harold Hitz Burton, who was retiring. Stewart served on the Supreme Court until he announced his retirement from the Court on June 18, 1981 at the age of 66. During his tenure (1958-1981) as an Associate Justice of the United States Supreme Court, Potter Stewart made major contributions to criminal justice reform, civil rights, access to the courts, and Fourth Amendment jurisprudence. Stewart leaned toward moderate, pragmatic positions, but was often in the position of dissenting during his time on the Warren Court. Stewart's philosophy might be most coherently traced to Justice Robert Jackson, about whom Stewart said: "He saw that 'judicial activism' could be a deadening and stultifying force... that every coercive and centralizing court decision deals a blow ... to the ability and then to the will of the democratic process to operate with responsibility and vigor." ; Signed by All Authors

Title: THE CONSTITUTION That Delicate Balance Landmark Cases that Shaped the Constitution

THE CONSTITUTION That Delicate Balance Landmark Cases that Shaped the Constitution