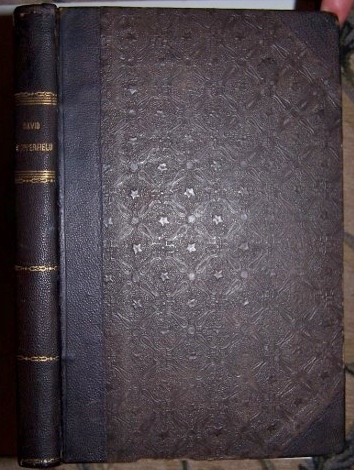 The Personal History of David Copperfield

viii, 327 p., [8] leaves of plates pages; An early American edition of Dickens' David Copperfield, bound up from the parts issue for the original owner -- black morocco flat spine - paneled and lettered in gilt, over pebbled brown cloth with a decorative pattern stamped in blind. There is a signature in ink on the front paste-down endpaper and pencilled below is the notation "Uttica, N.Y." The blank front free endpaper is partly detaching along the upper portion of the gutter -- there is moderate foxing throughout, a few stains scattered through, along with minor marginal tears to a few leaves. There are stab-holes to the gutter margins throughout from the sewing of the parts issue of these sheets; the clincher is the following pencil inscription on the (blank) recto of one of the inserted plates: "David Copperfield / ?????? / To bind" [This is written by the same hand responsible for the inscription on the front paste-down endpaper -- the plate is bound between pp. 176-177 and is titled below the image: "Mr. Micawber delivers some Valedictory Remarks."] "David Copperfield" issued in paperbound parts during 1849-1850 appeared from both the firms of Lea & Blanchard of Philadelphia, and John Wiley / G. P. Putnam of New York. These are sheets from Lea & Blanchard's serial issue [originally 20-parts-in-19] (with stab-holes visible). The text is set in double-columns (apart from the title page and preliminaries) on 327 pages. There were also eight illustrations which the title page attributes to H. K. Browne. Wilkins writes that these plates were "rather poorly engraved on wood by W. F. Gihon, after the Phiz etchings" [see Wilkins, William Glyde: FIRST and EARLY AMERICAN EDITIONS of the WORKS of CHARLES DICKENS... page 28]. The frontispiece is signed in the plate "GILBERT & GIHON." A scarce an early American edition, with interesting documentation that the presumed first owner had his set bound. Alas, as might be expected, the parts wrappers were discarded. All 8 plates are present. There is rubbing to the spine along the hinges and to the morocco leather corners, some wear to the edges of the cloth and some dulling to the sizing of the cloth to a portion of the rear cover. The plate on the blank recto of which J. H. Edmonds has signed and recorded his notation "To bind" has a 2-inch closed tear to the left margin, not quite extending to the edge of the image. See Yale/Beineke Gimbel/Dickens A127; Podeschi, J.B. Dickens, A127; McGuire Collection Catalogue 43; VanderPoel B224.

The Personal History of David Copperfield