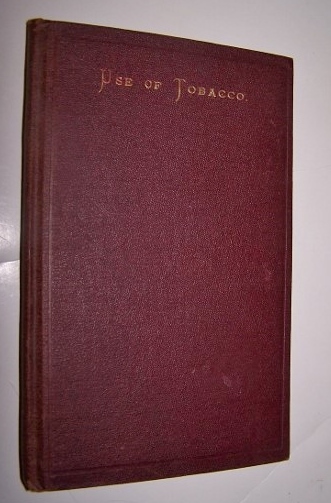 THE USE OF TOBACCO, and the Evils, Physical, Mental, Moral, and Social, Resulting Therefrom

37 pages; Original owner's name and date of June 29, 1869 in pencil on first blank after slate green endpapers. Otherwise clean and tight in original publisher's brown cloth binding with gilt lettering at front board. Minor rubbing at spine ends, otherwise Near Fine. OCLC 5857298 Dr. John Hoskins Griscom, a physician with Quaker roots, was a leader of American sanitary science in 1840s and 1850s. In this work he argues against the use of tobacco examining its numerous health and social consequences. Griscom started his medical career as a dispensery physician working with the poor, which led to his becoming a social reformer advocating tenement reforms, improved medical care, public hygiene and temperance to improve the living conditions of the lower classes. In 1845 a lecture by Griscom, was published unde the title Sanitary Conditions of the Laboring Population of New York. In that lecture, Griscom argued that poor health and poor sanitary conditions resulted in poor moral character and deportment. Contrary to the general assumption of the times, he suggested that the working classes in New York City were the victims and not the cause of their miserable condition. As Chairman of the Standing Committee on Public Health and Legal Medicine, Griscom argued for more numerous and better dispenseries, cleaner water supplies and better management of sewage, among other reforms. Griscom's untiring efforts ultimately led to major sanitary reforms, but they were not enacted until the 1860s. Griscom's other publications include First Lessons in Human Physiology (1846), The Memoir of John Griscom, L.L.D (1859), and Sanitary Legislation, Past and Future (1861). He also published in periodicals under the pen name "J. Gotham, Jr."

Title: THE USE OF TOBACCO, and the Evils, Physical, Mental, Moral, and Social, Resulting Therefrom

Keywords: Tobacco Use in the 19th century Tobacco and Cancer Tobacco and diseases of the Jaw and Neck Public Health American Sanitary Science Anti-Tobacco Literature OCLC 5857298

THE USE OF TOBACCO, and the Evils, Physical, Mental, Moral, and Social, Resulting Therefrom