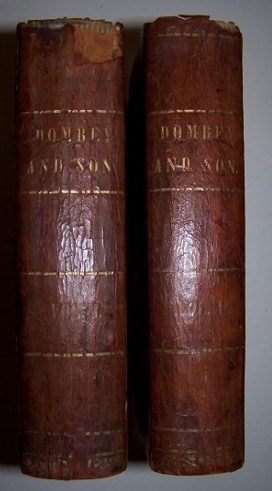 Dealings with the Firm of DOMBEY AND SON, Wholesale, Retail, and for Export

939 pages; The first American edition, bound from the original parts for their first owner in two half calf volumes over marbled boards. The flat spines in tan calf are "paneled" with simple pairs of gilt rules and the title is directly stamped in gilt in each second panel. The bindings are rubbed and worn, with cracking to the leather at the rear hinge of volume I and a piece of leather is now missing at the top of that spine -- (the rear board is holding on its cords). Toning and a few stains scattered throughout the text. Prelims & 939 pp. 34 plates only (usually, sets of the parts are found with two plates bound with each of the final 18 parts for a total of 36). There are signatures of J. H. Edmonds [the Utica, New York lawyer] in ink, dated 1848, on each front paste-down endpaper. In addition, there are pencil signatures and notations recording Mr. Edmonds' intention to bind his set; these notes appear on the half title, the 1846 title page (used in the second volume) and on the (blank) recto of the famous "dark" plate, near the end. The inscription on the "dark" plate is the most specific: "1/2 Light / Calf / J. H. Edmonds E[sq -- the final two letters have been trimmed off by the binder Edmonds commissioned, but Mr. Edmonds did use this form of signature in signing the 1846 title page. For volume I, the binder has used the half title ["Library of / Choice Reading / (rule) Dombey and Son"] -- and the title page issued with the final part (double number 19/20): [using the abreviated title "Dombey and Son" and the imprint "New York: / John Wiley / (of the Late Firm of "Wiley and Putnam") / 161 Broadway / 1848."] This is followed by the dedication leaf, the author's two-paragraph preface, and two leaves containg Tables of Contents for volume I and also Volume II. (The page numbers for the list of Contents for Volume II assume a pagination for that volume set back to page 1, but the pagination of these sheets bound from the parts issue are continuously paginated, so that this second volume has pages numbered "487" to "939." The text for this American parts edition was set and printed as soon as the English parts (London : Bradbury & Evans, 1846-48) arrived, and without waiting for the accompanying plates to be engraved. Consequently, each of the original parts wrappers (none are preserved in this bound set, alas) bore the note, "The illustrations for this number will be given with the next." There were no plates issued with the first part from Wiley and Putnam, and two plates in each of the next 18 parts. Evidently, a final pair of plates was meant to be available to purchasers by request through the booksellers, but these final two plates are now quite rare. The American plates were copies made as engravings on wood by J.W. Orr, done from the original designs by H[ablot]. K[night]. Browne, known as "Phiz." These are technically remarkable, and convey an excellent sense of the originals, even with a convincing version of the "dark" plate. Dombey and Son contains the first published example of a so-called "dark plate," created in the Browne original by use of a machine process involving a lining machine and roulettes that tinted the etched plate and heightened its black-and-white contrast. The single dark plate in Dombey and Son is "On the Dark Road," bound here between pp. 865 & 867. To quote from Smith's bibliography of Dickens in cloth about the British original: "The smooth blending of light and shadow on this illustration vividly contrasts it with the other illustrations in the novel and is a fine example of the dark plate process." The version engraved on wood by John William Orr is a brilliant re-creation using a seemingly inappropriate medium -- and is surprizingly effective. It seems appropriate that J. H. Edmonds chose to mark this plate with his name and instructions to the binder, making it less likely that this plate would be lost in the transfer to hard covers.The two plates issued with these Wiley and Putnam parts which did not make it into this volume were: "Major Bagstock is delighted to have that opportunity;" and "Mr. Toots Becomes Particular — Diogenes Also." There is no evidence of removal; evidently, they were lost from this set of parts before their owner had them bound in 1848. Also, as usual, the final two plates which were announced as available to purchasers of the parts after the conclusion of the issue, are not present here. No wrappers have been retained; this, too, is the usual state of affairs for these bound-from-parts sets. See OCLC Number: 191225906 (which states 4 locations, but really this should be 3, since the count of 4 includes a couple of spare parts at AAS, in addition to their splendid complete set). Podeschi, (Yale) Dickens, A104; Wilkins, Dickens, p. 25. The owner of the parts, who commissioned this binding and signed its front free endpapers upon delivery in 1848 -- was John H. Edmonds -- born in Utica, New York, and a leading lawyer in that city from 1833 until his death in 1881. He was Master in Chancery in the years immediately before the Civil War, and was said to have named at least two of Utica's streets: ["Howard" and "Leeds." More biographical details can be found in 'Memorial History of Utica, N.Y.: From Its Settlement to the Present Time' - edited by Moses Mears Bagg; see page 215].

Title: Dealings with the Firm of DOMBEY AND SON, Wholesale, Retail, and for Export

Dealings with the Firm of DOMBEY AND SON, Wholesale, Retail, and for Export