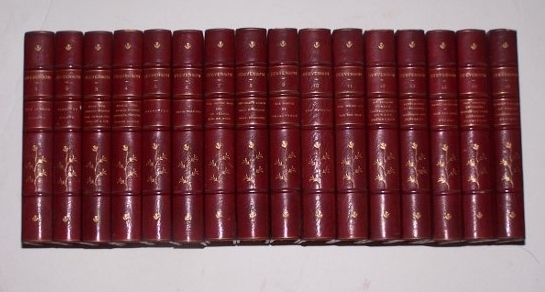 Beautifully bound set in three-quarter red morocco with four raised bands, gilt lettering and gilt image of a thistle at spines. Marbled boards and endpapers, gilt ruling to edges of leather on boards. Bindings gilt stamp signed by MacDonald Bindery in New York. Frontispiece illustration with tissue guard in each volume. Some rubbing at spine ends with very minor chipping to heads of a few volumes; a very attractive set. Volumes 1 thru 16 of the THISTLE EDITION of the Works of Robert Louis Stevenson comprising the complete "Novels and Tales" (12 volumes) and the complete "Travels and Essays" (4 volumes). These volumes contains the major prose works of Stevenson; later volumes in the series (not offerred here) gathered his "Letters and Miscellanies" and "Poetry and Ballads." James MacDonald (1850-1920) was born in Scotland and trained there as a bookbinder. He immigrated to the United States in 1873 and began working with William Matthews, a leading American bookbinder. By 1880 he had established his own business - The Macdonald bindery which quickly gained a reputation for skilled and beautiful work. According to the Boston Evening Transcript for May 22, 1912, Macdonald purchased the entire works of the famous Club Bindery from the estate of Robert Hoe. [The Club Bindery had closed in 1909 and the staff had moved to Cleveland to the Rowfant Bindery.] For several decades The Macdonald Bindery produced truly fine bindings for themselves and others.

Title: NOVELS AND TALES - TRAVELS AND ESSAYS [Volumes 1 thru 16 of the THISTLE EDITION of the Works of Robert Louis Stevenson]