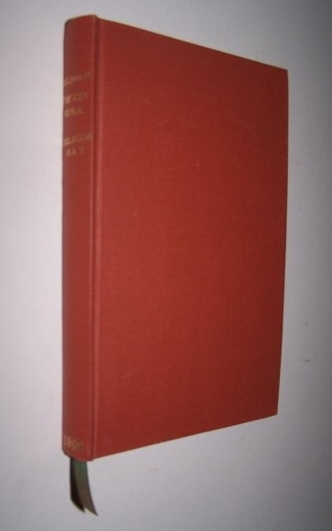 160 pages; Rebound in mid 20th century full terra-cotta cloth, original printed front wrapper bound in at the end, spine lettered in gilt, green silk placemark. The paper is somewhat toned and brilttle throughout. There is a modern repair to the hinges to the title leaf and half title; two leaves in the first gathering have minor chipping and lost in the black fore-edge margins. This is the scarce reissue of the 1899 first edition, prompted by the on-going Anglo-Boer war. To quote from the author's introduction: The war with the Boers and the belated award of the Berne jJurists have so largely enhanced public interest in Delagoa Bay, that I need offer any further excuse for presenting, in a revised and popular form, 'The Key to South Africa: Delagoa Bay." This one shilling edition had a reduced set of illustrations -- no frontispiece of Cecil Rhodes, but it does have three plates from sketches by the author, and his map of the crucial Transvaal - Delagoa Bay railroad. This railway line was officially opened by Paul Kruger the 8th of July 1895; the link to Pretoria having been completed on 20 October 1894. This rail link between the land-locked Transvaal Republic and Delagoa Bay, situated on the southeast coast of Mozambique, was significant to the South African Republic as it would give the Republic access to the port in Delagoa Bay, thereby making it independent of the harbours of the British Colonies located in Natal and the Cape. After the discovery of the main gold reef on the Rand in 1886 the matter became even more strategically and economically crucial. Before the opening of the railroad, transport-riders used ox wagons to transport goods to Delagoa Bay; this involved the risk of contracting malaria or even encountering lions along the way. With the start of the second Boer War, the British could see the strategic necessity of controlling the rails and access to and from Delaoga Bay -- now called Maputo Bay (Baía de Maputo). T. Fisher Unwin published the original of Jessett's book at 6 s. in the summer of 1899. Between that time and the appearance of this shilling edition, the Anglo Boer War broke out, a more substantial and complex conflict than either side expected. As one might expect, this reprint is more scarce, at least partly due to its physical fragility, with cheap paper and flimsy paper wrappers. OCLC listings bear this expectation out -- see OCLC Number: 19640080. This copy was found by one of the twentieth century's greatest collectors of Africana. The half title leaf has the faint, private, impressed stamp of the "Munger Africana Library" -- at one time this rare publication was the property of Professor Edwin S. Munger, professor of geography, emeritus, at the California Institute of Technology (Caltech). Munger [1922-2010] took his first trip to Africa in 1947-financed by poker winnings during his service in the U.S. Army. His second African trip was in 1949 as the first Fulbright Fellow to Africa, where he attended Makerere University, Kampala, Uganda. He was an Institute of Current World Affairs fellow in Africa from 1950 to 1954, and from 1955 to 1961 was an American Universities Field Staff member. During this period, Professor Munger lived a year each in Ghana, Nigeria, Kenya, and South Africa. He was an evaluator for the Peace Corps in Uganda in1966, and Botswana in1967, and chairman of the U.S. State Department Evaluation Team in South Africa (1971). For 14 years he served as president of the L.S.B. Leakey Foundation. During all these travels, Munger collected books, forming eventually a private library of approximately 60,000 volumes on the subject. Munger actively used his books; he edited the scholarly series: 'Munger Africana Library Notes' based on studies by him and his students (1969-1982). It may be his pencil note concerning rebindingon the original front wrapper now preserved following the final leaf -- "full cloth."