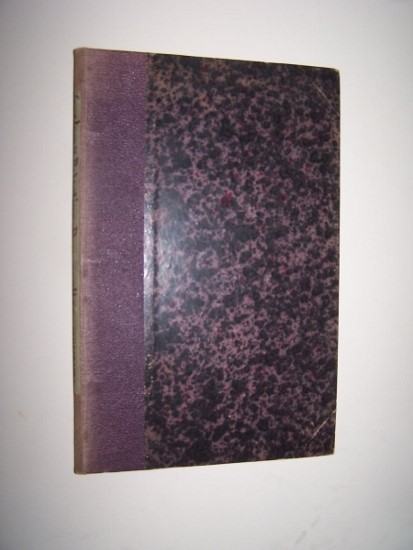 544-655 pages; Contemporary binding: plum colored pebble-grained cloth over pattern printed boards, plain endpapers -- leaves unopened at the top edges, others trimmed rough. This is just the 112 page monograph by Bornmüller, (with a 2- leaf unopened bifolium at the front, and one extra page (i.e., pp. 541-543 at the front, and p. 656) at the rear, so that the important text of Bornmüller's Flora of Syria would be preserved complete. This is the original printing, not to be confused with any of several modern productions. There are no plates or illustrations. On the "extra" first page (541), there is a circular blindstamp of Herman Knoghe, a botanist with the Institut de Botanique, Montpellier -- (Knoghe was more or less a contemporary of the author's -- he became a member of the Societe Botanique de France in 1906). A card pocket and slip have been neatly removed from the rear endpapers; there are no other marks of ownership. The text is clean, the sewing tight. The author conducted extensive botanical explorations thoughout the Middle East in his youth. In 1903 Joseph Bornmüller was appointed curator of the "Haussknecht Herbarium" at Weimar, and maintained this position until 1938. The plant genus Bornmuellerantha from the family Scrophulariaceae is named for him.