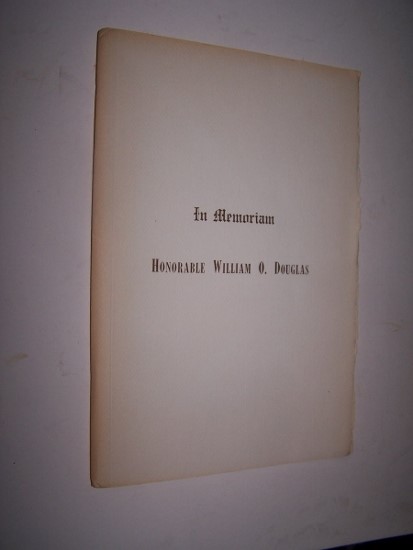 IN MEMORIUM HONORABLE WILLIAM O. DOUGLAS Proceedings of the Bar & Officers of the Supreme Court of the United States

53 pages; Clean and tight in original printed wrappers. Issued upon the death of Justice William O. Douglas, this contains the remarks of Chief Justice Warren E. Burger, Solicitor General McCabe, Judge Fletcher, Professor Countryman, Judge Rifkind, and a lengthy address by Justice Abe Fortas. William Orville Douglas (1898 –1980) served as an Associate Justice of the Supreme Court of the United States for 36 years and 209 days (1939–75), the longest term in the history of the Supreme Court. Douglas holds a number of records as a Supreme Court Justice, including the most opinions. Douglas was known for writing short, pithy opinions which relied on philosophical insights, observations about current politics, and literature, as much as more conventional "judicial" sources. Douglas was often at odds with Justice Felix Frankfurter, who believed in judicial restraint and thought the Court should stay out of politics. In 1975 Time magazine called Douglas "the most doctrinaire and committed civil libertarian ever to sit on the court". From the collection of Judge Gerhard Alden Gesell (1910 – 1993) who began his career as a staff trial lawyer and later as adviser to Chairman William O. Douglas at the new Securities and Exchange Commission from 1935 to 1941. Gesell then entered private practice with Covington & Burling in Washington, where he specialized in antitrust and other corporate cases. While engaged in private practice, Gesell continued to serve the public sector. In 1945 and 1946, he served as Chief Assistant Counsel for the Democrats during the Pearl Harbor hearings. In 1962 he was a appointed Chairman of the President Kennedy's Committee on Equal Opportunity in the Armed Forces from 1962 to 1964. In 1967 Gesell was appointed to the United States District Court for DC by President Lyndon B. Johnson. He presided over several memorable cases. For example, in 1969 Judge Gesell declared that the District of Columbia's abortion statute was unconstitutional. In 1971, Judge Gesell was involved in the litigation surrounding the publication of The Pentagon Papers. He ruled that The Washington Post could continue to publish the series of articles about the Vietnam War based on the leaked secret study despite the Government's attempts to halt publication. During the Watergate investigations and litigation, Judge Gesell ruled that the dismissal of Archibald Cox as special prosecutor in the "Saturday night massacre" in October 1973 had been illegal. In the 1974 trial of John D. Ehrlichman, Judge Gesell sentenced him to 20 months to five years in prison for his role in the Watergate break-in. In 1989, a jury found Colonel North guilty of three of the 12 crimes he was charged with: obstructing Congress, destroying documents and receiving an illegal gratuity. Believing North had been carrying out orders from authorities above him, Gesell did not to send him to prison, but fined North $150,000, placed him on probation for two years, and assigned him community service.

Title: IN MEMORIUM HONORABLE WILLIAM O. DOUGLAS Proceedings of the Bar & Officers of the Supreme Court of the United States

IN MEMORIUM HONORABLE WILLIAM O. DOUGLAS Proceedings of the Bar & Officers of the Supreme Court of the United States