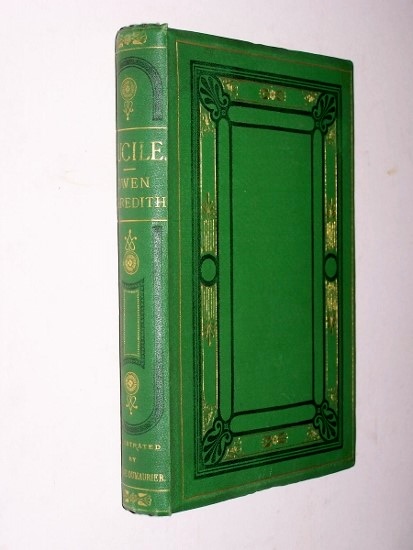 vii, (1), 261 pages; First edition with the illustrations by George Du Maurier. Beautiful Victorian decorative binding of green cloth with decorative stamping in black and gilt, gilt lettering at spine, all edges gilt. Former owner's bookplate with printed initials: "B.D.W." and light scattered foxing on reverse of a couple plates. Bookseller's small label at foot of front pastedown endpaper - "S & T Gilbert / Booksellers / 4 Copthal Building / Back of the Bank" and binder's ticket on rear pastedown - "Bound By / Westley's & Co. / London" Edward Robert Lytton Bulwer-Lytton, 1st Earl of Lytton, GCB, GCSI, GCIE, PC (1831 1891) was an English statesman and poet. He served as Viceroy of India between 1876 and 1880, including during the Second Anglo-Afghan War, 18781880 and the Great Famine of 187678. Lytton published a volume of poems under the name of Owen Meredith when he was twenty-five and went on to publish several other volumes under the same name, including this one Lucile, which was his most popular. Some of his best poetry is very beautiful, and much of it is of a melancholy nature. George Louis Palmella Busson du Maurier (1834-1896) was one of the great book illustrators of Victorian England. A beautiful example off this Victorian book.