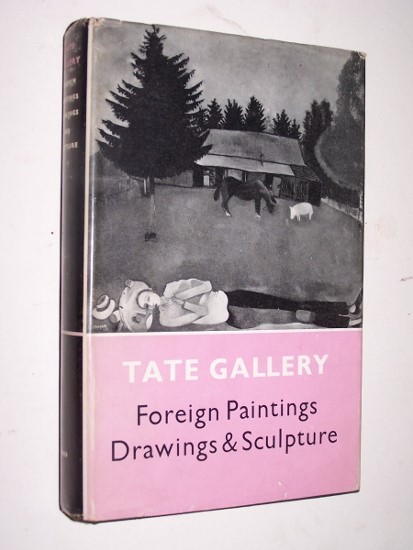 THE FOREIGN PAINTINGS, DRAWINGS AND SCULPTURE [in the Tate Gallery]

Tate Gallery Catalogues; Autograph; 300 pages; Signed by the author on the ffep - "With all good wishes / Ronald Alley / 18.9.59" Clean and tight in original binding in very good dustjacket. This book constitutes the first catalogue of the Tate Gallery's foreign collection to be published since 1934. In addition to a detailed description of each art work, there is a brief biography of each of the artists. Illustrated with 56 plates, many containing multiple . From the collection of Stefan P. Munsing [1915-1994] who worked in New York City as a designer for Hans Knoll, Norman Bel Geddes and RCA. Munsing served in the Army in World War II, then as Chief of the Monuments, Fine-Arts & Archives Section in Munich. The MFAA was an Army unit locating stolen artworks which had disappeared into the huge Nazi hoards during the war. [Readers of this listing will have ample reason to appreciate the activities of this important organization by the end of December 2013, when George Cluny's movie: "Monument Men" is due to be released.] Munsing later joined the U.S. Department of State during the later 1940's and '50's, where he established the State Department's Amerika Haus programs in Munich and Berlin and organized exhibitions and cultural programs in Germany and Austria. In 1955, he was named cultural officer at the American Embassy in London, where he staged exhibitions of such New York artists as Philip Pavia, Paul Jenkins and Ben Shahn and became an important force in the London art world. Munsing returned to the U.S. in the 1960's and 70's where he helped establish the contemporary art collection of the National Museum of Fine Arts in Washington (now the National Museum of American Art) and headed the State Department's Art in Embassies program. In retirement from the State Department after 1976, Mr. Munsing was a consultant to the American Association of Museums. ; Signed by Author

Title: THE FOREIGN PAINTINGS, DRAWINGS AND SCULPTURE [in the Tate Gallery]

THE FOREIGN PAINTINGS, DRAWINGS AND SCULPTURE [in the Tate Gallery]