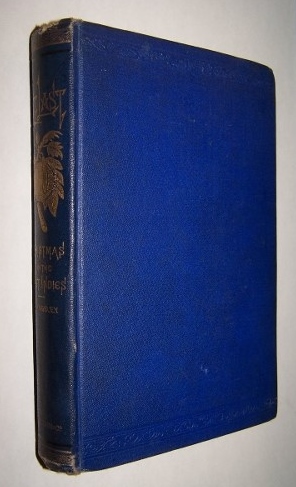 AT LAST - A Christmas in the West Indies

xii, 401 pages; Contents clean and tight in original blue cloth binding with gilt lettering and gilt image of tropical fruit at spine, some minor wear to cloth at spine ends. Illustrated with frontispiece + 12 leaves of plates and many additional illustrations throughout text. OCLC: 26528098 Chronicling his own journey from Southampton to the Spanish Main. Charles Kingsley was an English clergymen, novelist, and historian, best known perhaps for his book The Water Babies. In At Last: A Christmas in the West Indies, Kingsley recounts his travels to the West Indies, largely focused on Trinidad, in 1869. It is in many ways a typical 'travel' book of its time, rich in description and presenting an 'imperial' position and outlook on the colony, although as critics such as Claudia Brandenstein, Simon Gikandi and Catherine Hall have pointed out, this position is complicated and, as Kingsley was sympathetic to the idea of evolution and was one of the first to praise Charles Darwin, in some respects an ambivalent one. Kingsley went to the West Indies with liberal and Christian sympathies, but he found it difficult to be objective about what he witnessed due to his theological background and intellectual tradition. For example, he supported the strict control and supervision of the indentured Coolies, even though in England he was a strong advocate of emancipation and the creation of a '"moral bond"' between employee and employer. Gikandi argues that Kingsley reached this conclusion about the West Indian context not because of what he saw there or because of his understanding of the Coolies' own views and perspectives. "Rather the traveler reaches his conclusions from three mutually informing sources: official reports (both oral and written), intellectual Orientalism, and evolutionary doctrines." [Amazon review].

Title: AT LAST - A Christmas in the West Indies

AT LAST - A Christmas in the West Indies