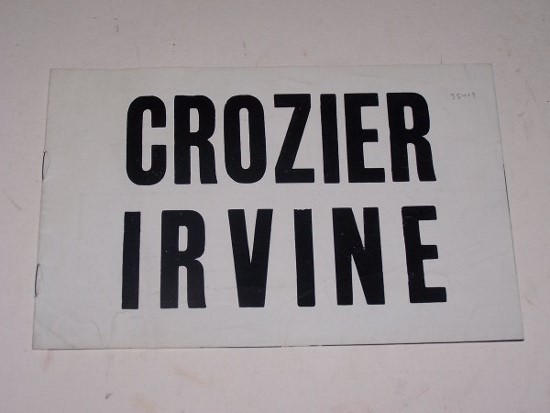 [8] pages; The rear wrapper has a parallel brief artistic c.v. of the pair. A minor hint of creasing to the fragile publication, and some rubbing to the rear wrapper. OCLC Number: 78797695 (and two other OCLC numbers, each with a single location -- UC Santa Barbara; The Frick, and the Tate). Stapled catalogue in self wrappers for a joint show by two Williams -- Crozier and Irvine, both born in Scotland and educated at the Glasgow School of Art (1949-53). After graduation, both artists went down to London and explored Soho. After an initial show with a third artist at the Parton Gallery, Halima Nalecz invited Crozier and Irvine to show at the Drian Gallery in Porchester Place, which she had founded to show the work of abstractionists or near-abstractionists who were being ignored by the establishment. Crozier married, and then re-married, and found his way to Ireland for at least part of each year, where his second wife, the art historian Katharine Crouan edited the magnificent monograph on Crozier published in 2007; Crozier died in 2011. Irvine married an American in London, and moved with her back to her native Maine, where he still paints in Brooklin. This early joint catalogue represents an exhibition held Sept. 23-Oct. 13, 1958. There are photographic portraits of the two young artists, and each gets a page of biographical notes and a full-page b/w reproduction of a painting.