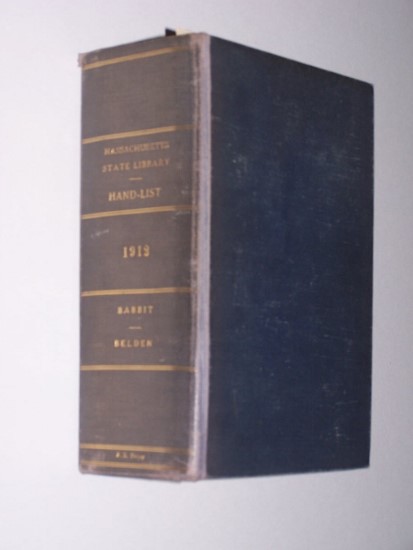 HAND-LIST OF LEGISLATIVE SESSIONS AND SESSION LAWS, Statutory Revisions, Compilations, Codes, Etc., And Constitutional Conventions of the United States and its possessions and of the several states to May, 1912

By: Babbitt, Charles J. ; Prepared Under the Direction of Charles F. D. Belden

634+ pages; Blue library-style buckram binding with gilt lettering at spine, a specially bound copy interleaved with blank pages many of which have extensive annotations by the former owner Francis X. Dwyer regarding additions and corrections, some with vendors and prices. Also tipped-in to the interleaved blanks and laid-in are typed notes of additional materials located/acquired. Dwyer's name is written across top edge of text block and is also imprinted in gilt at the base of the spine. OCLC: 1863111 Francis X. Dwyer served in the Law Libraries at Harvard, and later, as librarian at the Law Library in the Library of Congress for decades, rising to Acting Law Librarian of Congress. Dwyer was also a lawyer, and he had the distinction of having been admitted to the Bar of the U.S. Supreme Court in 1939. He co-authored a widely used textbook: "Introduction to the Study of Law," by Edmund M. Morgan and Francis X. Dwyer. A unique working copy, including extensive material of interest to the history of law bibliography and scholarship. For example, at page 340 New York Bar Association, there are nine typed pages tipped in on the opposing blank page beginning with "The Laws and Acts of the General Assembly... of New York ... April, the 9th, Anno; Domini 1691 ... Printed 1694" with complete collation; etc. At the top of that first page of addenda is an ink note that reads: "encl. of letter 3/11/32 signed by A.J. Rosenbach" At page 212 is laid-in a two page typed letter on the letterhead of H.P. Kraus offering "The First Book copyrighted by Law in America" i.e., Massachusetts. The General Laws and Liberties - 1672; the letter bears manuscript notations: At the top "The LC copy is acc. to my records defective, lacks title-page and M 1-4." and in a different hand next to listing: "have too, one good copy checked with Mr. Dwyer to verify also. BB" There are notes and annotations on a vast majority of pages, including some historical price information, e.g., on page 456 under Session Laws, Public Laws of the State (1798) Printed by Carter and Wilkinson. Providence, 1798, pencil marginalia record 6 price points for that edition: "5 - M '13 / 4.50 - M '04 / 6 - H '17 / 3 - H '19 / 12 - AJH '29 / 8 - Stat '35" Opposite page 31 "Provisional laws and joint resolutions... Jefferson Territory... Omaha, 1860... [First book printed in Colorado] -- Hudson Book Co. Aug 1926 $3000 / John Vanmale Sept. 1931 $2000." Absolutely fascinating to those of us who are absolutely fascinated by such material.

Title: HAND-LIST OF LEGISLATIVE SESSIONS AND SESSION LAWS, Statutory Revisions, Compilations, Codes, Etc., And Constitutional Conventions of the United States and its possessions and of the several states to May, 1912

HAND-LIST OF LEGISLATIVE SESSIONS AND SESSION LAWS, Statutory Revisions, Compilations, Codes, Etc., And Constitutional Conventions of the United States and its possessions and of the several states to May, 1912