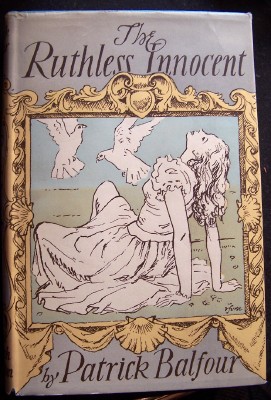 Some minor wear at head and heel of spine - quite a nice copy of this scarce novel by Lord Kinross (his first published book). John Patrick Douglas Balfour, 3rd Baron Kinross (19041976) was a Scottish historian and writer noted for his biography of Mustafa Kemal Atatrk and other works on Islamic history. Educated at Winchester College and Balliol College, Oxford, he became first a journalist and later a writer of history and travel books. During the Second World War he served with the Royal Air Force and from 1944-47 was First Secretary at the British Embassy at Cairo. Lord Kinross was a homosexual, despite a brief marriage to Angela Mary Culme-Seymour (1912-2012), the former wife of the artist John Spencer-Churchill. When Balfour was posted to Cairo during World War II, she began a five-year relationship with Major Robert Hewer-Hewitt which produced two sons. Lord Kinross and Angela were divorced in 1942. The main character in The Ruthless Innocent was supposedly based on Angela Culme-Seymour. ; Experience the pleasure of reading and appreciating this actual printed item. It has its own physical history that imbues it with a character lacking in ephemeral electronic renderings.