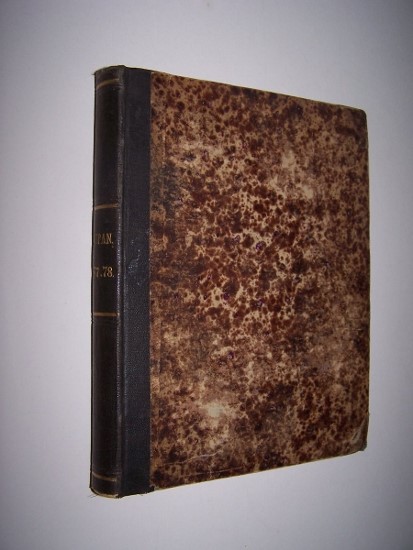 [vi] & 192; & 192 pages; Contemporary marbled paper-covered boards, black pebbled cloth flat spine with titles and dates lettered in gilt. Minor rubbing, and several of the issues display faint traces of a vertical fold. Two years (1877 &1878), bound together in a single volume, of this charming Swedish-language periodical for children. ["Bikupan" can be translated into English as "beehive"]. Issued roughly every two weeks -- 24 issues to the year, typically four leaves / 8 pages each. Two leaves in the year 1878 have short, closed tears. Each issue has a full-page wood engraving as a title page, and either one other full-page illustration, or a couple of smaller plates. Technically, this was a Sunday School publication, and some of the subjects are religious, but most of the illustrations depict children, many with toys or animals, or other subjects which might interest children. The cover page of issue 14 from 1878 shows a young boy receiving a haircut from a barber while another watches and holds his hat. Another depicts an serious looking young boy wearing spectacles preparing to administer medical treatment to a small bed-ridden doll while his sister watches. Yet another portrays a monkey, also wearing spectacles, serving as schoolmaster to an assortment of household pets -- [one dog has been made to wear a dunce-cap...] The wonderful illustrations were clearly gathered from several sources. This volume appears also to be part of the social history of Harlem, as it has an ownership signature on the paste down endpaper in pencil: "Gerda Malmstadt." We have a similar volume of "Bikkupan" which has an ownership signature in ink of "Flora Malmstadt / New york Sep. 7th. 1881 / No 63 west 124th st." The address in upper Manhattan is in the heart of Harlem; while now the site supports a seven-story apartment building built in 2001, in the late nineteeth century, numbers 61 & 63 sported an adjoining pair of handsome frame houses. It seems fortunate now that in 1932, a realtor named J. Clarence Davies, a collector of New Yorkiana and patron of the Museum of the City of New York's Print Department, commissioned photographer Charles Von Urban to document New York City buildings that were thought likely to be threatened with demolition. Charles Von Urban is thought to have included photographs of every wooden-frame building then extant in Manhattan -- including the pair whose right hand half housed the Malmstadt sisters one hundred and thirty five years ago -- (see image at Museum of the City of New York). Text entirely in Swedish.