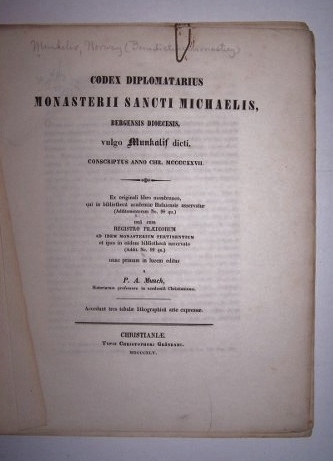 [2], vi, 220 & 3 ff. facs pages; Contemporary patterned brown cloth, somewhat shaken, lacks the spine. The title page is detached, but present (having been attached to the following pair of leaves by an old-fashioned paper-clip). With the Library of Congress bookplate ("Huitfeldt-Kaas Collection") mounted to the front paste-down endpaper. There is a handsome presentation inscription on the facing blank leaf, from Peter Andreas Munch, to Christian Lange. Beneath this inscription is the LC Surplus-Duplicate stamp in red ink. Apart from a tiny "LC" perforated stamp on the title page, there are no other library marks. There are a few neatly written annotations in brown ink, including two ms. additions to the list of errata at the end. This is the first printed edition of documents relating the history of Munkeliv Abbey -- founded as a Benedictine abbey by King Eystein I (Øystein Magnusson) in about 1110, dedicated to Saint Michael. Munkeliv -- (referred to on the title page as "vulgo Munkalif dicti...") was built on a high spot overlooking Bergen, Norway. It had a complex history, involving being taken over by pirates (once) and (twice) by the Bridgettines. It survived the Black Death, but suppressed by the Reformation and the whole complex was destroyed by fire in 1536. Twelve years after this publication by the leading Norwegian historian, Peter Andreas Munch, excavations were begun on its sight. Among the finds was a marble head of Øystein Magnusson (a.k.a. King Eystein I, the founder of the abbey) -- supposedly the oldest-known portrait of a Norwegian. P. A. Munch, the editor of this significant document, became well known for his work concerning the medieval history of Norway. His work also touched on Norwegian archaeology, geography, ethnography, linguistics, and jurisprudence. For his achievements, he received a substantial grant to work in the Papal archives in the Vatican, for which he moved to Rome. He is said to have been one of the first non-Catholics to gain full access to the Vatican archives. He was also the uncle of the painter Edvard Munch. This 1845 work includes three full page lithographic facsimiles of manuscripts at the end, printed on thicker paper. See OCLC Number: 833826807.