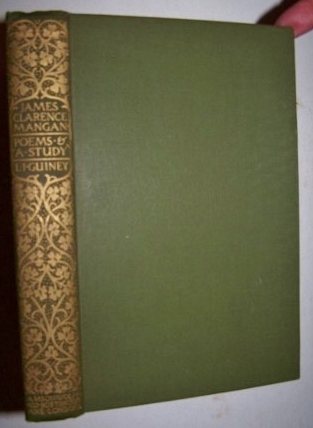 xiii, (1), 361 pages; Clean and secure in original green cloth binding with gilt lettering and decorative stamping at spine - a lovely 1890s production. OCLC: 856870 James Clarence Mangan was an Irish poet, born James Mangan (Irish: Séamus Ó Mangáin) in Dublin in 1803; he died in 1849. He work began to appear in Dublin publications in 1818, as well as his translations of work from German, Turkish, Arabic and Irish. Unlike his early poetry, after the Famine Mangan increasing wrote patriotic poems, including works such as Dark Rosaleen, a translation of Antoine Ó Raifteiri's Róisín Dubh and A Vision of Connaught in the Thirteenth Century. His work was praised by both James Joyce and William Butler Yeats, the latter considered Mangan one of the best Irish poets.

Title: HIS SELECTED POEMS with a Study by the Editor Louise Imogen Guiney