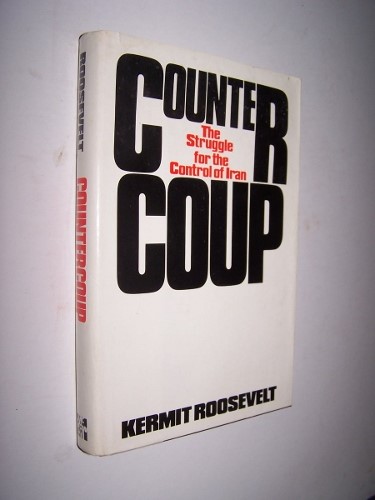 COUNTERCOUP - The Struggle for the Control of Iran

Autograph; 217 pages; Clean and tight in original publisher's binding of slate grey boards with white cloth spine lettered in black. Very nice dustjacket, not clipped, minor edgewear. A very personal inscription from the author (in shaky hand) to his friend and in-law on the front free endpaper -- "To dearest Mary Reynolds / our favorite [illegible word] comadre [illegible word] / Kim Roosevelt." Mary Reynolds daughter Priscilla married Kim Roosevelt's son Kermit Roosevelt III; they are mutual grandparents to the latest possessor of the famous Roosevelt moniker "Kim," which, by tradition, is assumed by alternating iterations of the namesakes of Kermit Roosevelt, son of Theodore]. The author Kermit Roosevelt, Jr. -- grandson of President Theodore Roosevelt, after graduating from Groton School and Harvard (1937) and a brief teaching career at Caltech, joined the OSS (Office of Strategic Services), precursor of the CIA at the outbreak of the second World War; for whom he was eventually stationed in Cairo. The author stayed on after the change and was significant in his contributions to the Central Intelligence Agency during its formative years in the 1940s and 1950s. He specialised in the Middle East and travelled extensively in the region from his Washington base. Briefly put, "Kim" Roosevelt masterminded the overthrow of Iranian President Mossadegh after the latter nationalized the Iranian oil industry in 1952. In this book he details how the CIA and British Intelligence operatives, under the direction of Roosevelt, conducted the operation the British had given the codename -- Ajax. Roosevelt himself went to Teheran, working under cover as "James Lockridge" on June 19, 1953, was put up in Tehran in a place rented by British intelligence, and as Mr. Lockridge, became a regular at the Turkish Embassy. He may have inadvertently attracted attention in some circles in that city where he is alleged to have shot a hole in one during a game of golf with the Turkish Ambassador. Roosevelt/Lockridge broke the news to an initially reluctant Shah that he was to be installed as the sole power in Iran after Mossadegh was removed. At a crucial point, the young Shah complicated matters by fleeing to Baghdad, but Roosevelt calmly orchestrated a series of bombings and shootings in Iran and implicated Mossadegh, and also arranged for the influential army commander, General Fazlolah Zahedi, to make an address to the country over the radio, and spent CIA funds freely to secure friends to the cause. After some uncertaintly, the Shah was able to return to Teheran just three days after he left, and assumed his Peacock throne. Mossadegh was arrested and imprisoned for three years; others of his supporters were not so fortunate. Kermit Roosevelt's Operation Ajax has not been without controvery and detractors over the years since. It should be said that Sir Winston Churchill, serving in his final period as British Prime Minister is reported to have been an admiring supporter. Another British figure who was well acquainted with spycraft, Kim Philby (the Soviet mole in MI6, who shared with Kim Roosevelt having Rudyard Kipling's "Kim" as the source of his name) encountered Mr. Roosevelt frequently in Washington during the post-war 1940's. Philby, after his defection to the Soviet Union in 1963 famously described the American "Kim" as a typically urbane, courteous Easterner, "the last person you would expect to be up to his neck in dirty tricks." Roosevelt's superiors at CIA were certainly impressed with the success of Operation Ajax, and reportedly offered him the opportunity to initiate a similar operation aimed at "the government of Guatemala," but Roosevelt evidently demurred in this new assignment. The publication of this memoir of his eventful 1953 sojourn in Teheran many years later in 1979 is hardly accidental timing, for in that year, the Shah was forced to flee Iran by fundamentalist Islamic revolutionaries who engaged Reza Pahlavi's Washington sponsors in a lengthy hostage crisis. The consequences continue to reverberate today. The author sumitted the text of this book to the CIA, and is reported to have adopted some changes and deletions suggested -- [see Malcolm Byrne, Ed., 2014, "Iran 1953: The Strange Odyssey of Kermit Roosevelt's Countercoup" [National Security Archive Electronic Briefing Book No. 468, edited with introductory comment by M. Byrne]. Kim Roosevelt [i.e., Kermit Roosevelt, Jr.] and the original owner of this copy were nearly exact contemporaries. The author of 'Countercoup' died after a stroke June 8, 2000. Mary Reynolds died about six weeks later, aged 87. Mrs. Reynolds was a noted James Joyce scholar; her works include "Joyce and Dante: The Shaping Imagination," in which she traced the influence of Dante's poetry on Joyce's writing; "Joyce and Nora," "Joyce and D'Annunzio," "Mr. Bloom and the Lost Vermeer" and "James Joyce: New Century Views." She taught a seminar at Yale on Joyce, and was a trustee of the International James Joyce Foundation and an editor of both the James Joyce Studies Annual and the James Joyce Quarterly. Her late husband, Lloyd T. Reynolds was the longtime Chairman of the Yale Department of Economics. The Reynolds and the Roosevelts lived for many years in the same apartment complex in Washington DC's Cathedral Heights. ; Signed by Author

Title: COUNTERCOUP - The Struggle for the Control of Iran

COUNTERCOUP - The Struggle for the Control of Iran