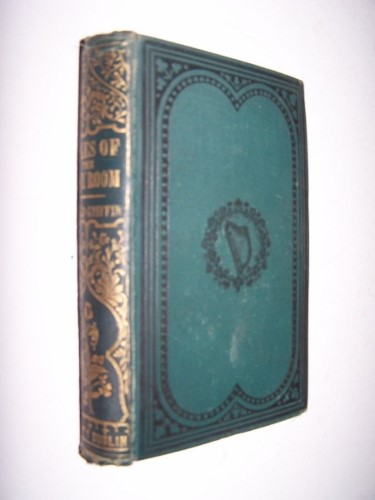 TALIS QUALIS or Tales of the Jury Room

(viii), 463 pages; Clean and secure in original green cloth binding with gilt lettering and decorative stamping at spine and decorative stamping in blind to boards. No date printed, but circa 1845. Posthumously published, this delightful collection of stories is set in an improbable framework. An English visitor to Ireland wanders into an empty jury room during the assizes and when the jurors suddenly return to the room hides himself in a cupboard. Their lengthy deliberations produce no verdict, so they are held overnight during which they entertain themselves with telling stories and singing songs. After the twelfth tale the intruder is discovered and forced to tell a tale afterwhich they help him escape. Gerald Griffin (1803 – 1840), Irish novelist, poet and playwright, was born in Limerick, Ireland. After a brief spell writing for the newspapers in Limerick, Griffin set off for London in 1823 hoping to advance his literary career and seeking to have his play "Gisippus" produced. Unfortunately, his efforts in London were not rewarded; after living in poverty to the point of injuring his health, he returned to Ireland in 1827. There he managed a rather successful career, writing for reviews and magazines and eventually publishing his Holland-tide Tales, followed by Tales of the Munster Festivals, The Collegians, The Invasion, Tales of a Jury-Room, etc. In 1838, he burned all of his unpublished manuscripts and became a noviciate in the Catholic society of Christian Brothers in Dublin. Sadly two years later Griffin died from typhus fever at The North Monastery, Cork.

Title: TALIS QUALIS or Tales of the Jury Room

TALIS QUALIS or Tales of the Jury Room