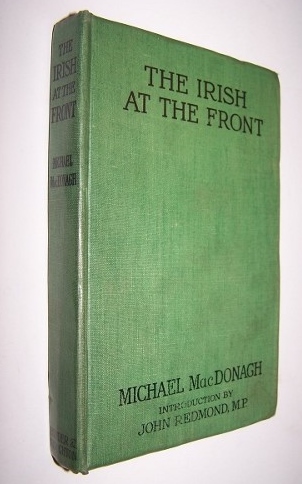 THE IRISH AT THE FRONT With an introduction by John Redmond

158, 2 (ads) pages; Clean and tight in original green cloth binding with black lettering at spine and front cover. Includes a two page extract from "The Irish Nuns of Ypres, An Appeal." This narrative of the more signal feats of the Irish Regiments in France, Flanders, and at the Dardanelles, is based on letters of regimental officers and men, interviews with wounded soldiers of the battalions, and those invalided home, and, also, in several cases, on the records compiled at the depots. The war is the greatest armed struggle that the world has ever seen, and when we think of the heroism and resolution shown in it, the trials and the sufferings, the victories and the disasters, and then turn to the bald and trite official despatches, the dissimilitude of things, the contrast, is most abrupt and jarring. But so it is, and probably we must continue to rely upon the accounts given by the men in the fighting line for any real appreciation of the nature of the war." [Preface]

Title: THE IRISH AT THE FRONT With an introduction by John Redmond

Keywords: Irish in World War I The Great War Irish Division at Gallipoli Dublins and Munsters at Dardenelles

THE IRISH AT THE FRONT With an introduction by John Redmond