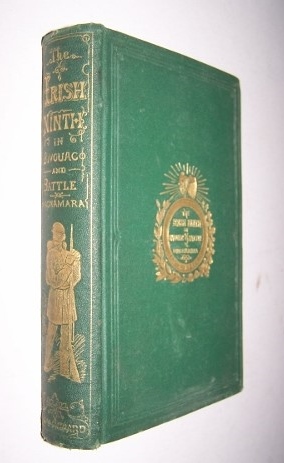 The Irish Ninth in Bivouac and Battle or, Virginia and Maryland Campaigns

Contents clean and secure in original green cloth binding with gilt stamping at spine and front cover, both boards ruled in blind; cloth worn at spine ends, some foxing to initial leaves. Frontispiece and additional illustrated plates. OCLC: 1600400 Michael Macnamara, a member of the 9th Regiment, Massachusetts Volunteer Infantry, wrote this first-hand account of his regiment's history directly following the War. From author's preface: "The incidents and events which constitute the basis, and perhaps the value, of the following pages, were noted in a diary as they occurred, amid the varied scenes through which we passed during three years of active military service. In addition to these personal facilities, we have availed ourselves of official data, obligingly placed at our disposal, in order to make the regimental roster unquestionably accurate." At the outbreak of the rebellion, a meeting of prominent Irish American citizens was held in Boston, to form a regiment to support the Union under the direction of Captain Thomas Cass, of the "Columbian Artillery." The Ninth Massachusetts Volunteer Infantry Regiment saw active duty from June 11th, 1861, to June 21st, 1864. The Irish Ninth saw action at Malvern Hill, Battle of Antietam, Battle of Fredericksburg, Battle of Chancellorsville, Battle of Gettysburg, Battle of the Wilderness, Battle of Spottsylvania Court House, and many other engagements.

Title: The Irish Ninth in Bivouac and Battle or, Virginia and Maryland Campaigns

The Irish Ninth in Bivouac and Battle or, Virginia and Maryland Campaigns