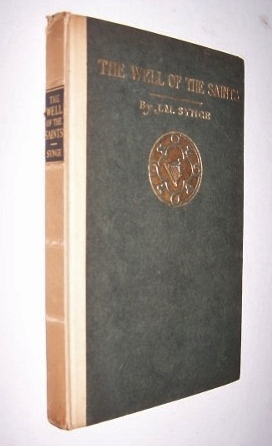 The Well of the Saints - A Play

Clean and secure in original binding of green boards with white spine, gilt lettering, some wear at spine ends. This three-act play written by Irish playwright J. M. Synge, first performed at the Abbey Theatre by the Irish National Theatre Society in February 1905. The setting is specified as "some lonely mountainous district in the east of Ireland one or more centuries ago." J.M. Synge (1871 – 1909) was an Irish playwright, poet, prose writer, travel writer and collector of folklore. He was a key figure in the Irish Literary Revival and was one of the co-founders of the Abbey Theatre. He is best known for his play The Playboy of the Western World, which caused riots in Dublin during its opening run at the Abbey Theatre.

Title: The Well of the Saints - A Play

The Well of the Saints - A Play