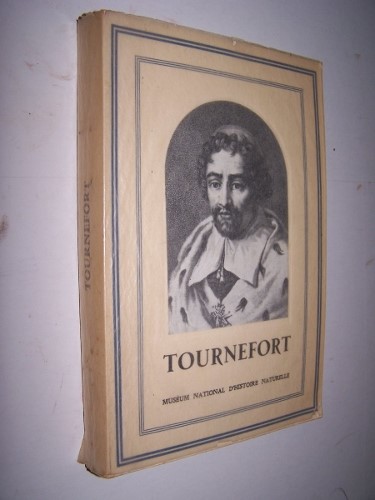 321 & colophon pages; Publisher's wrappers, printed title and mounted portrait of the subject -- in the original glassine outer jacket, folded in the French manner. Minor wear to the glassine, but a tight, clean copy. This is the second volume of the distinguished series 'Grands Naturalistes Francais' - published under the direction of Roger Heim. The subject: Joseph Pitton de Tournefort [1656-1708] is usually credited with being the first to make a clear distinction between genus and species. He travelled widely in Greece, Constantinople, Armenia, Georgia and other regions along the shores of the Black sea, collecting specimens for his herbarium (a word which Tournefort seems to have invented). One of his memorials is the street in Paris on which he died as the result of a carriage accient, now named in his honor -- (Rue de Tournefort in the 5ème arrondissement).