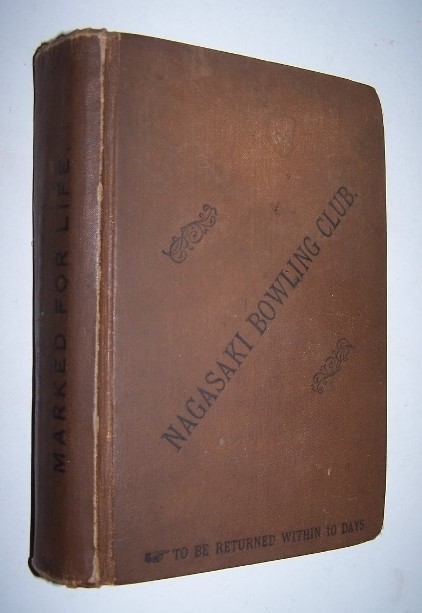 Democracy: An American Novel bound with: Marked for Life, by A. F. Pinkerton

186; 147 & [1] pages; TITLE I: Democracy: An American Novel. London: Ward Lock & Co., [nd. but ca. 1882]. 186 pp. Second British edition, probably an unauthorized piracy. Macmillan had published the first British edition, also anonymously, in May of 1882. This cheaply made edition has a number code at the foot of page 186 suggesting that it was printed in December, 1882. bound with....TITLE II: Pinkerton, A. F. Marked for Life. Chicago: Laird and Lee, 1887. (The Pinkerton detective series, issued monthly. No. 2, April 1887). 147 & [1, ads] pp. The second title has a tiny worm track running across the (blank) upper margins of many leaves, and stab-marks in the gutter margins from previous sewing. "Democracy" is well preserved, although its paper was clearly inexpensive and the printing job perfunctory. The binding is in medium brown cloth -- lettered in black, with the titles of the two titles running vertically up the spine, and "NAGASAKI BOWLING CLUB" running at a diagonal at the center of the front cover. Along the foot of this cover: "To Be Returned Within 10 Days." Mounted to the front cover is a bookplate, printed in black (text entirely in English) within a decorative type border -- on bright pink paper. "Nagasaki Bowling Club / Library / Vol. [354, neatly written in ink] / Members are entitled to the loan of / not more than 2 Vols. at a time for a / period not exceeding 10 days." Plain endpapers show considerable foxing, the volume has a modest "lean" and the spine has been neatly repaired along the rear gutter edge. ------ This book seems unikely to exist -- in several respects. First, the two texts which share this binding have nothing in common except their respective settings in the United States of America. The binding and the bookplate assert ownership by an entity which sounds odd and even dubious: "The Nagasaki Bowling Club." And finally, the city in which this far-fetched entity was located was incinerated on the ninth of August, 1945; one of only two instances of nuclear warfare ever perpetrated against a populated city. Even before what historians came to refer to as the "Meiji Restoration, Nagasaki had been specially designated as one of five ports in Japan in which segregated settlements for foreigners were to be tolerated -- (along with Kanagawa [Yokohama], Kobe, Niigata and Hakodate, under the terms of the Ansei Five-Power Treaties which took effect in July, 1859). By luck of geography, Nagasaki was closest to the coast of China, which made it a most important staging-area for the introduction to Japan of a dazzling variety of western technology (and people). One of the western innovations which made its way to the gateway of Nagasaki, evidently, was the bowling ball. The June 22, 1861 issue of the 'Nagasaki Shipping List and Advertiser' contains a small ad announcing the opening of the "International Bowling Saloon" on Hirobaba Street in the settlement -- evidently Japan's first bowling lane. It must have been popular among the western settlers in Nagasaki, since it soon became customary for hotels constructed for western guests to include a bowling lane or two in their basements. Bowling is a social sport, so the activity eventually concentrated in the "Nagasaki Bowling Club" -- established at No.10A Minamiyamate. The Club served for many years as a social institution for residents of many nationalities. It is recorded in the property records of the city at No. 10A -- in 1889 (but may have been established earlier). The records further indicate that Frederick Ringer (British) bought the Bowling Club at auction, in June, 1904. In that same year, Jean A. Couder, a Canadian-born former Merchant Seaman, who had stepped off his last ship in 1862 and spent the remainder of his life in Nagasaki, died in his house next door to the Club, aged 64. Counder, who owned a French restaurant and bakery in the nearby neighborhood, Oura, is recorded as having served for a period of six years as honorary secretary of the Nagasaki Bowling Club. For the two books linked together in this extraordinary volume, see OCLC numbers 17538478 & 592193. We should be most grateful (and surprised) to hear details of any other surviving volume from the "Nagasaki Bowling Club Library."

Title: Democracy: An American Novel bound with: Marked for Life, by A. F. Pinkerton

Democracy: An American Novel bound with: Marked for Life, by A. F. Pinkerton