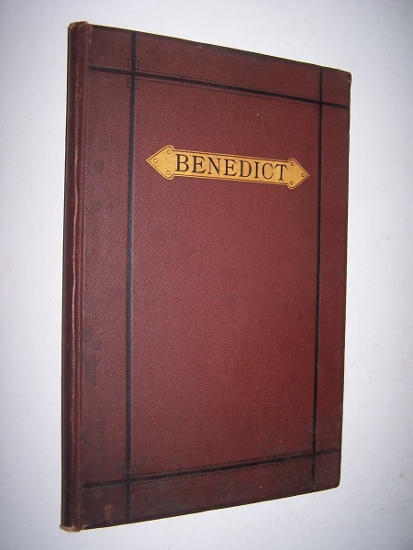 58 pages; Publisher's brown cloth, with covers divided by rules in black and with the title: "BENEDICT" in black against an industrial-shaped gilt lozenge device, chocolate brown endpapers, all edges gilt. Minor toning and spotting to the edges of the covers, a small chip of brown cloth is missing at the foot of the spine, and there is moderate foxing to the title page and engraved frontispiece. The latter is a portrait (with facsimile signature) depicting the subject: Aaron Benedict [1785-1873], an important industrialist and businessman from Waterbury, Connecticut. There are two original albumen-print photographs, each mounted to sheets -- within decorative gilt borders. Benedict was compelled by illness to leave Yale College at the beginning of the nineteenth century. He recovered, to the extent that he lived to be 87 and one-half years old, and founded and ran Benedict and Burnham Manufacturing Company -- a concern which grew from its mastery of metals, their manufacture and manipulation. Benedict's involvement with brass appears to have dated back to the war of 1812, during which he turned scrap kitchen brass into buttons for American military uniforms. His company eventually started a concern to build clocks (and later, watches) from cut brass wheels and gears. The basic concern remains active, and the clock and watch business now forms a part of the Timex Group. Aaron Benedict served in both houses of the Connecticut State Assembly, and, although he outlived his wife by three years, the couple was able to celebrate a sixtieth wedding anniversary in 1868. One of the two original photographs in this scarce volume shows the subject, posing with his great-grandaughter, Charlotte Benedict Rice (who was christened during the Benedict's Golden Wedding celebration. The subject was part of a significant Connecticut family; his father had fought in both the French and Indian Wars and the Revolution (and lived to be nearly 97). See OCLC Number: 22729188 -- (eight locations).