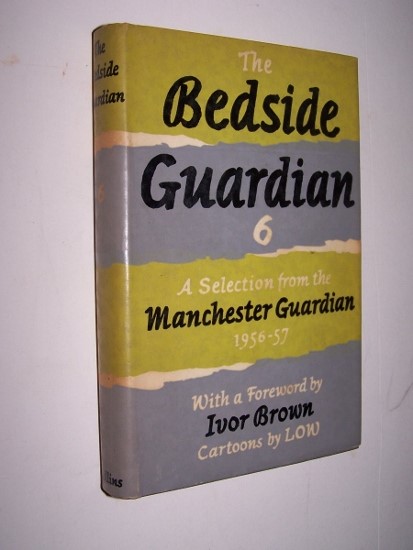 256 pages; Publisher's grey pebbled cloth. A fine tight copy in an excellent dust jacket (which has a small brown stain on the rear panel, but is otherwise well preserved. Not price clipped -- 13s. 6d.) With an intriguing inscription in blue ink on the front free endpaper: "For ELLIE / from your [underlined] / bedside guardian / [signed] Alistair / JAN 1. 1957 / Happy 1960." The writing is unmistakably that of Alistair Cooke -- (with his characteristic "f"-like curve to the top of the letter "t" in "Alistair"). It is not surprising to find an inscription from Alistair Cooke in one of the superb "Bedside Guardian" anthologies. Cooke [1908-2004] became a foreign correspondent for the 'Manchester Guardian' newspaper (later The Guardian), for which he wrote until 1972. Cooke had more contributions in this sixth Bedside Guardian than any other writer (10 pieces). His greatest fame in his adopted country, of course, was as the host of Masterpiece Theatre, PBS's showcase of quality British television. He remained its host for 22 years. But Cooke was known throughout the world for a continuing series of what came to be called "Letter from America." The first American Letter was broadcast on 24 March 1946 (the initial commission was for only 13 instalments). The series came to an end 58 years (2,869 instalments) later, in March 2004, and Cooke died at the end of that month, aged 96. An interesting question, which we cannot answer at present, is the identity of the recipient of this inscription: "ELLIE." There is a bit of a hint in the form of a small ink note on a slip of paper tucked under the rear flap of the dust jacket: ("Ellie -- Wm. Berensen leaves for Europe July 12th. Can you follow up on his offer to contribute before then?") So, Ellie, likely had an editorial role in journalism or media. ; Signed by One Author

Title: The Bedside Guardian 6 A Selection from the Manchester Guardian 1956 - 1957