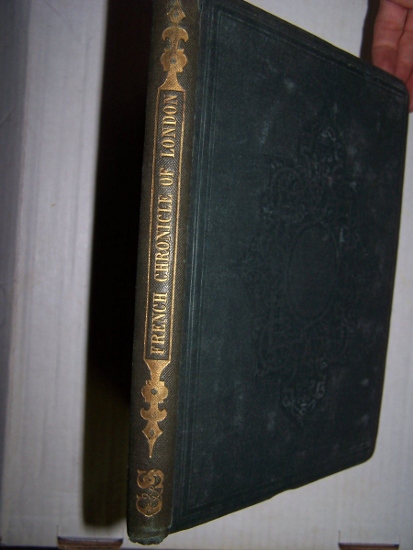 xxii + [2] + 112 + [36] pages; Publisher's dark green-grey cloth, spine lettered and decoratively stamped in gilt, with an arabesque pattern stamped in blind on the front and rear covers, pale yellow endpapers. The half title states: "The French Chronicle of London. " First printed edition of an important source for the Mediaeval history of London -- forming the latter portion of a parchment book in 8vo preserved among the Cottonian Manuscripts. It was written in old Norman French, evidently around the middle of the fourteenth century, but the name of the compiler has been lost. An excellent example of Camden Society Publication XXVIII -- top edges of the leaves unopened. Binding is clean and tight, with only light shelfwear at the spine ends.; Experience the pleasure of reading and appreciating this actual printed item. It has its own physical history that imbues it with a character lacking in ephemeral electronic renderings.

Publisher: London, Printed for the Camden Society By John Bowyer Nichols and Son: 1844